A Visual Tour of Boyhood Influences

The post below originally appeared on this blog in September, 2013. I'm reposting it here in the spirit of Anne's post about formative influences on the DIY & Dragons blog.

We are, of course, the sum of our experiences. When it comes to how we view fantasy, we are each a crucible in which our influences are made molten and then shaped into something new. Our early influences are at the core of our imaginative alloy.

I’ve been tracing the early fantasy visuals I was exposed to and attempting to unravel where each fits into how I imagine.

How do you judge what was an important early influence? This is my (undoubtedly shoddy) rubric: if you look at it now, you still feel a visceral reaction to the possibilities it hints at.

Below are the early influences I still find wonderful, and what I think they taught me emphasized in bold type. 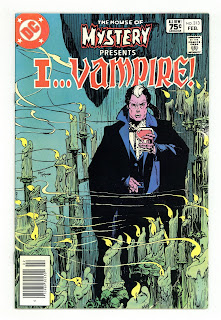 As near as I can tell, the run of the "I...Vampire!" story in The House of Mystery comic was my first exposure to a lurid gothic aesthetic. I still find the cover pictures to the left, with its suave-but-dangerous vampire supping on blood amidst a veritable field of guttering candles to be absolutely enthralling. It was likely this same cover the started my lifelong interest in all things gothic. Whatever I learned from that is about commitment and following a muse wherever it will lead you. Get obsessed, and stay obsessed. 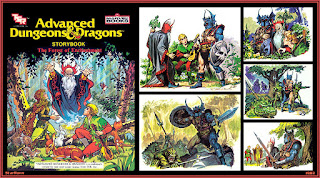 My first D&D book wasn’t a game book at all. Instead, it was The Forest of Enchantment AD&D storybook I bought from the school book sale in elementary school. This scene of ren faire bards and druids vs. sword & sorcery warriors and wizards set an important tone: in fantasy, anything can be mixed. Do not bat an eye; do not cry about maintaining a narrow "milieu!" 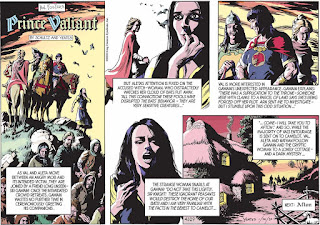 We didn’t get the paper at my house when I was a kid, but when I was at my grandparents’ house I would try to piece together the narrative of Prince Valiant comics from whatever Sunday papers they had forgotten to throw out. There would be gaps in the story, of course, but that didn’t make my interest in it wane at all. I still believe that it is okay to have "gaps" in your game’s story. 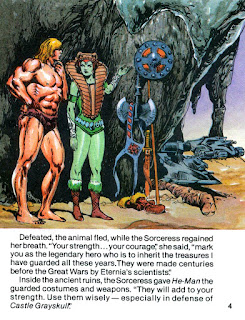 The mini-story books that came with the first bunch of He-Man toys were also terribly captivating. The cartoon was a massive, sanitized disappointment after the weird sword & sorcery aesthetic these comics deployed. It seemed like the creative team didn’t feel the need to check their weirder impulses: a skull-faced would-be conqueror? A barbarian on a giant green tiger? A space cop entering the fray? Yes, yes, and yes. Let weirdness be your permission slip. 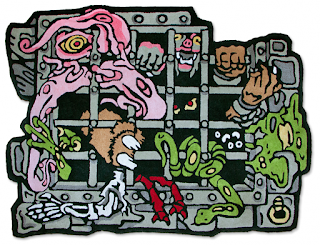 Speaking of He-Man, I could spend all day looking at this decal for the dungeon of Castle Grayskull and wondering what each of those beasts entailed. The monsters you see are only half the story; there are also the monsters you never see fully–those are the ones that stay with you. 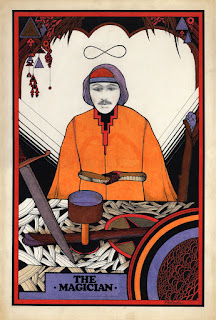 A friend of my mother's gave me a tarot deck illustrated by David Palladini one year for my birthday. I still have it, although at this point the cards are worse for wear and one of them is marred by a strange purple stain that I can only assume is some sort of eldritch infestation. And yet, these strangely pale denizens of a time shrouded in mists and all the mystic trappings of post-New Age aeonizing still compels me. Incorporating resonant symbols is a useful shorthand. 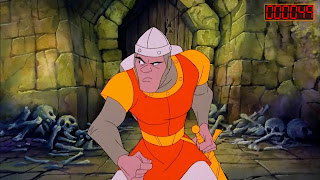 The Dragon’s Lair video game was always broken and unplayable at Chuck E. Cheese, but that didn’t stop me from watching the demo loop over and over again. It was all action scenes, really; remember action and keep things moving. 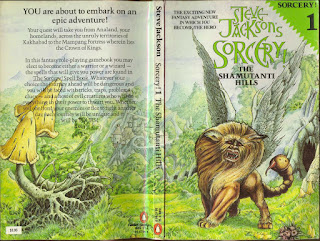 The Sorcery! books were the intermediate step between Choose Your Own Adventure and D&D for me. They were chock full of grotty, weird John Blanche art. These were definitely the gateway drug that led me to play Warhammer in high school. Sometimes it’s okay for your character to die horribly–as long as that is entertaining, you’ll be moved to start again from the beginning. Also, it’s also okay to fudge things to get to the end! 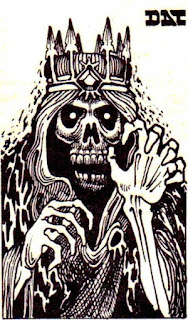 My first D&D book was the original AD&D Monster Manual. (Orange spine--come on, I'm not that old.) To be completely honest, when I got my hands on the Monster Manual I had no idea if I'd ever get to play D&D, but that was immaterial. What really mattered was having a book chock full of gribly illustrations of monsters. I could say something here about the valuable lesson of mistakenly using the monster stats in the Monster Manual with the B/X rules (we had no idea they were separate product lines), but what I really want to say is this: there are only two things that matter in life--monsters and hot chicks. 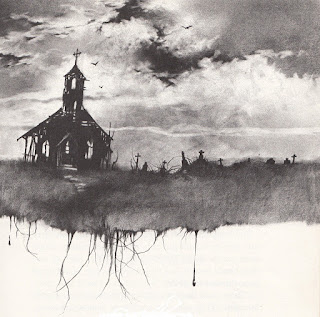 My aunt gave me the Scary Stories to Tell in the Dark books. The art by Stephen Gammell is utterly amazing. I will never get over this stuff. The pictures are all from well-worn campfire tales–but even though the shape of those stories aren’t surprising, the art does surprising, haunting things with them. You can do new things with old ideas. 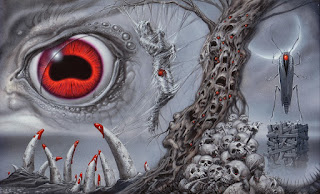 The cover art from my first Lovecraft books was done by Michael Whelan. I love the limited palette, even though the art still unsettles me to an extent I'd rather not measure. It’s liberating to do a lot with a limited pool of color. 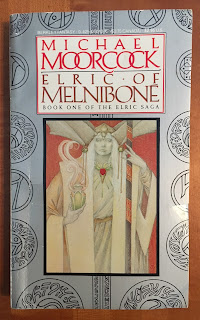 The summer I started playing D&D was also the summer I was reading Moorcock’s Elric books. In my mind, D&D was mystical and hazy and effete and decadent like the covers of these novels. I was never really struck by the murderhoboism that many others latched onto. Elric does not survive a funnel; Elric does not die to some kobold in a dirty little mine. Instead, Elric lived and breathed through an epic cycle that took place far away from the world of mundane cares. Escapism is one of the finest things.
Posted by Jack Guignol at 11:39 PM