Not My Ravenloft: Outcast Ratings 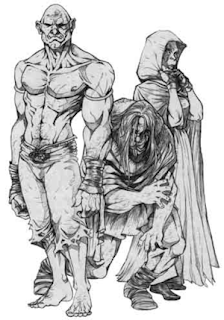 With the imminent arrival of Van Richten's Guide to Ravenloft, I wanted to revisit a series of posts I started, but never finished: Not My Ravenloft, a series where I talk about how I ran the setting often in opposition to its presentation in the official supplements.

Ravenloft is my favorite of the official D&D settings. However, there are some bits in the setting that I just don't use, for one reason or another. Today I want to talk about the Outcast Rating mechanic introduced in the third-edition Ravenloft Campaign Setting book, although it should be noted that similar mechanics have existed for the setting since the Realm of Terror box set.

Outcast Ratings are a numerical disadvantage of varying severity assigned to nonhuman player characters attempting to interact with people who are unlike them. The Outcast Rating also provides a bonus to intimidation against people who are not your "kind" if you are a nonhuman.

I think I understand where this mechanic is coming from. It wants to present Ravenloft's brand of dark fantasy as one where the common people who inhabit the land are superstitious and xenophobic peasants. However, I feel like this butts up against another idea that the setting tries to establish: the people of Ravenloft are worth fighting for. It's difficult to get worked up enough to put your life on the line fighting monsters on behalf of ignorant bigots.

In my Ravenloft games, fantasy racism isn't a trope I want to give undue prominence. I figure that since it isn't unusual for the mists of Ravenloft to pull strangers of all ancestries into the land, the people who inhabit the land might be a bit more used to encountering unusual humanoids from abroad. Although the average farmer in Mordent may not have ever seen a tabaxi or loxodon before, I don't take it as read that they will react with fear and revulsion. I'm not saying that bigotry doesn't exist in my games; it's just not an idea I want to emphasize enough to warrant mechanizing.

Also, I don't really like how the Outcast Rating mechanic tramples on certain character concepts. There's no point in playing a charismatic race or a class that relies on charisma if you're always going to be fighting against a mechanic that won't let you be good at the thing you signed on to be good at.