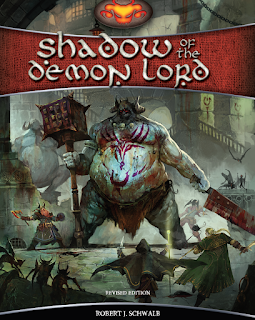 Some fans of Shadow of the Demon Lord maintain that the game is very different from 5e Dungeons & Dragons, but I don't think that's a particularly accurate claim. As I stated here in my Four-Way Grimdark Shoot-Out post, I think SotDL is a great alternative for a group already familiar with D&D who want a darker experience. Although SotDL is a dark fantasy rpg, most of the familiar elements of D&D are present in some fashion, albeit that the tone of SotDL is much more apocalyptic and grimdark; SotDL's default setting exists in a state of upheaval and things are headed toward a horrific end as the titular Demon Lord begins to exert its world-ending influence more strongly. D&D doesn't usually get that dark, even in the Ravenloft or Dark Sun settings.

Comparisons of Shadow of the Demon Lord to Dungeons & Dragons feel inevitable, as Robert J. Schwalb, SotDL's author, also worked on fifth edition D&D before lighting out for his own territories. This is the first in a series of blog posts detailing both the similarities and differences between SotDL and D&D as a way of examining where the resemblance and divergence of the two games might matter to a gamer choosing between them. Let's start by comparing the core mechanic of both games. Shadow of the Demon Lord clearly springs from the same mechanical design principles as the latest version of D&D.

The core resolution mechanic in SotDL is a d20 roll modified by an attribute penalty or bonus and possibly a number of boons and banes. Boons are d6s that are added to the roll; boons are gained from a variety of sources, such as special abilities or favorable circumstances, but you only ever take the highest number rolled among the boon dice. For example, if you make a roll with three boons, you'd roll 3d6 but only add the highest of those three dice to your d20 roll. Banes represent penalties; you subtract the highest bane die from your d20 roll. Boons and banes cancel each other out on a one for one basis; if you make a roll that has three boons and two banes attached to it, you'd make the roll with a single boon.

This core mechanic is clearly similar to D&D's, but in D&D the core resolution mechanic involves rolling a d20 and adding an ability score modifier and a proficiency modifier. In SotDL's system, boons are obviously taking the place of a proficiency bonus that scales as you gain levels. Even with this difference, however, they arrive at similar results because the more boons you roll with, the more likely you are to add a higher number, which approximates a rising proficiency bonus that is added to your roll.

To spell it out more clearly, this is the breakdown of the core mechanic of each game:

The similarity is impossible to miss. Where they differ is in the potential for randomness. D&D's proficiency bonus is a static number; you can count on a +2 proficiency modifier to always add +2 to your roll. In contrast, SotDL's mechanic makes things a bit swingier; a single boon is as likely to add +1 to your roll as it is to add +6. Personally, I tend to find SotDL's greater randomness more exciting; in my experience, it leads to bigger moments of triumphs and memorable catastrophes. On the other hand, I could see gamers who prefer consistency preferring D&D's system, even though any d20 roll is bound to have a measure of unpredictability no matter what.

In SotDL, if you have two sources granting you a boon and one penalizing you with a bane, you still make the roll with one boon because banes cancel out boons on a one-to-one basis. This gives more granularity, but also potentially increasing the "handling" time of figuring out how many boons or banes you actually need to include as part of your roll.

An interesting difference between the core mechanics of the games is what you compare your roll against. In D&D, your d20 roll is compared against either the Armor Class of a foe you're trying to hit in combat or a range of possible Difficulty Classes if the roll is an ability check or saving throw. In SotDL, rolls are compared either against an attribute (such as Defense for a melee attack or Intellect for a mind-effecting spell) or against a flat 10 for challenge rolls. (Challenge rolls are most often analogous to "skill checks" or "saving throws.") Instead of adjusting the target number to represent varying difficulty in SotDL, that is instead handled by boons and banes. Ten is an easy target number to remember, so I like that for ease and speed of play.

Another benefit that isn't readily apparent in the way SotDL does things is that there is no Difficulty Class that scales out of reach as characters face ever more deadly foes. 5e D&D has a problem with this at higher levels, particularly in regards to saving throws. Because only two of a characters six saving throws tend to increase as they gain levels and the saving throw DCs of their enemies increase similarly, saving throw DCs eventually reach a place where characters are unlikely to make successful saving throws against baleful effects. For example, a high level fighter can easily be locked down by an ancient dragon's fear effect, which runs contrary to the fantasy of being a dragon-slaying warrior of renown. Although powerful foes in SotDL might have abilities that are resisted with a bane or two, the roll needed to resist those abilities remains 10 or higher, which feels like the characters at least have a shot at survival even against horrific monsters.

Next up: D&D's races vs SotDL's ancestries.