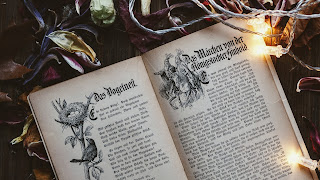 I've started running the adventures in Candlekeep Mysteries lightly reskinned for my Krevborna setting. The characters are all employed as members of Creedhall University Library's "Special Collections" department, aka adventurers. This is a recap of what happened in the second part of the "The Joy of Extradimensional Spaces." Fair warning: spoilers lurk below.

Elsabeth and Rising Leaf were still on the hunt for the last volume that would be the key to them leaving the extradimensional manor created Fistandia, a search that took them down into the building's basement.

The first room they explored appeared to be a summoning chamber. A magical circle surrounded by runes was etched into the stone floor, an empty book stand stood nearby, and the room smelled of sulfur. The room's only resident seemed to be a toad. As Rising Leaf searched the room, Elsabeth bent down to get a closer look at the toad--which promptly launched itself at her face, transforming into a quasit as it leapt through the air.

The quasit clawed Elsabeth, poisoning her. She dropped to the floor, inert. Thinking quickly, Rising Leaf grabbed Elsabeth, dragged her out of the summoning chamber, and slammed the door shut before the quasit could escape the room. The quasit rattled the door in its frame, but proved too weak to be able to open the door from inside.

After Elsabeth regained consciousness, the pair continued their exploration. They discovered a chamber filled with specimen jars, some small, some disturbingly large. Each container held a preserved monster; they noticed a cockatrice floating in formaldehyde, a giant jellyfish creature with eyestalks, a fungal monstrosity, a jar full of clawed hands, etc. One jar had been broken; pieces of shattered glass littered the floor. Whatever had been inside had since fled. Not wanting to hang around in a room full of monsters, dead or not, they pushed on.

The final chamber in the basement proved to be an alchemy laboratory featuring vials of unidentifiable fluids, charts detailing arcane formulae, and stacks of books. Among the books, they found the tome they were after: a book with the letter E inscribed on its spine. Elsabeth and Rising Leaf mused on the meaning of the letters they had collected, and Elsabeth realized that the codeword was "LIBERTY."

Returning to the foyer, the command word was spoken and the portal was reopened. Traversing the purple door returned Rising Leaf and Elsabeth to the study room in Creedhall. However, there were a few additions to the room that were not present when they had left. Doctor Matreus, who had fled through their original portal last time, lay dead on the ground, apparently the victim of some sort of poisonous sting judging by the lump on his neck.

Another new wrinkle was revealed when the duo attempted to leave the study room to get help with the doctor's corpse. As they approached the door, the imp that Doctor Matreus had smuggled out of the extradimensional house became visible and attacked! Rising Leaf smashed it with his staff and stamped on it; Elsabeth wound up and gave a mighty swing that sent the imp flying through the air, where it collided with a wall and fell to the ground. Curiously, in death it had transformed into a stone figurine of an imp.

Help was called for and the job was wrapped up. Although Doctor Matreus was now dead, Horatio Lupa was pleased that his whereabouts had been ascertained and Creedhall University Library had gained some potentially useful information about how to enter and leave Fistandia's secret home. Horatio congratulated Elsabeth and Rising Leaf on a job well done, let them keep the healing potions found on the doctor's body, and told them that Doctor Matreus's death would be ruled a "heart attack" to maintain the university's reputation as a safe place for students and scholars to pursue excellence.