The Book of Inner Alchemy 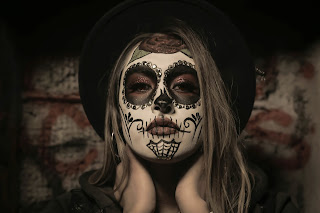 I've been running the adventures in Candlekeep Mysteries lightly reskinned for my Krevborna setting. The characters are all employed as members of Creedhall University Library's "Special Collections Department," aka adventurers. This is a recap of what happened in "The Book of Inner Alchemy." Fair warning: spoilers lurk below.

A fatal incident had occurred in a restricted section of the library: two members of the Special Collections Department had been murdered and pages had been cut from a tome called The Book of Inner Alchemy. The book described ways of manipulating ki to serve as a shortcut to immortality. Examining the crime scene provided a few clues. Gnargar ascertained that the two SCD agents had been killed by someone wielding powerful martial arts. Also discovered in one of the SCD agent's hands was a scrap of black cloth emblazoned with a white skull. Leaf and Gnargar both recognized the insignia; it was the symbol of the Death's Head Killaz, a group of monks who had turned from the righteous path to operate as bandits in the Cloakwood.

Into the Cloakwood, then. As they traversed the forest looking for the hideout of the Death's Head Killaz, the group smelled a noxious scent and spotted a writhing darkness inhabiting a hollowed out petrified tree. Approaching the tree were two people wearing black outfits and with their faces painted to resembled skulls. The pair were pushing a wheelbarrow piled high with corpses. The group watched as the two Death's Head monks began to heave the bodies into the oozing darkness, which consumed the corpses. The group decided to follow the two monks back to their hideout.

The group followed the two monks into a clearing that sheltered three wooden structures and a larger stone edifice shaped like a blossoming lotus flower. Between the entrance to the clearing and the buildings stood a forest of stone pillars. As the group headed toward the smallest of the wooden buildings, they were spotted by monks clinging to the stone columns above them, where they were keeping watch. There were four lackeys dressed in black and a man with silver hair who was clearly their leader. The leader identified himself as Steel Crane, and his black jacket was torn exactly where the Death's Head Killaz skull insignia should have been.

Rising Leaf engaged Steel Crane in a high-flying martial arts duel as the two monks bounced from pillar to pillar trading blows. Gnargar and Elsabeth kept the lackeys occupied, felling them one after another. Back up amid the stone columns, Steel Crane swung a metal whip at Leaf; Leaf leapt up and ran along the thin steel coil, closing the distance to land a fearsome kick that knocked his opponent unconscious. Leaf rode his body as it fell, using it to cushion the impact of the fall.

Leaf engaged with Bak Mei, while Gnargar faced off against Jade Tigress and Elsabeth held the lackeys at bay. Rising Leaf found himself overmatched by the older martial arts master; Bak Mei's manipulation of ki left him stunned and wide-open to a flurry of attacks that knocked him unconscious. Gnargar triumphed against Jade Tigress and her poisonous strikes, but was felled when Bak Mei turned his attentions on him--Gnargar was also knocked out. Elsabeth managed the lackeys by knocking them into the pool of lilies and slaying them as they emerged one-by-one, but she now found herself alone against Bak Mei. Drawing on a previously known inner well of strength, she plunged her sword past the monk's canny defenses, ultimately ensuring the group's victory. The day was carried on a razor-thin margin. Leaf and Gnargar were revived, and  after gathering the missing pages from The Book of Inner Alchemy, the battered and bruised group fled the compound before more lackeys could intervene.