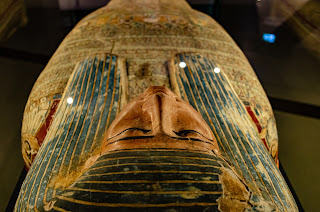 I've been running the adventures in Candlekeep Mysteries lightly reskinned for my Krevborna setting. The characters are all employed as members of Creedhall University Library's "Special Collections Department," aka adventurers. This is a recap of what happened in "The Canopic Being." Fair warning: spoilers lurk below.

As is usual, Elsabeth and Rufus were called into a meeting with Horatio Lupa to receive their next assignment on behalf of the library. This time, however, Horatio was in a dark mood; he paced the room as he informed them about a book that had already been in the library's possession for nine months. The book was initially thought to be a tome related to ancient burial practices and therefore misfiled, but a scholar at the university named Maya Sadaar realized that it was actually a manuscript detailing the many ways to make an undead mummy. The book itself proved to have an unnerving appearance: it was bound in some sort of scaly hide that randomly sprouted reptilian eyes that seemed to watch everyone in the room.

Maya had deep misgivings about the book, but she had gone missing before she could relate her concerns to Horatio. Worse yet, at the back of the book was a list of "sacrifices" and two of Elsabeth and Rufus's coworkers in the SCD and a friend from two previous adventures were on that list: Rising Leaf, Tobias Wolfe, and Lady Valor's names were there alongside Alessia Baseer (a priest at Our Lady of the Sorrowful Vision) and Maya Sidaar's. Adding a further ominous tone to this list was the fact that both Rising Leaf and Tobias had been unexplainably missing from work. Even more disquieting was that the list of sacrifices ended with Rufus Clarke's name!

Since it appeared that Rufus could be the next target, he and Elsabeth attempted to set a trap for whomever might be after him. Rufus stationed himself in a tavern, with Elsabeth disguised in a hooded cloak at a nearby table. However, the person who approached Rufus surprised them: a woman dressed in clerical vestments, who looked like a fish out of water in the busy tavern, sought him out. Her name was Shira Endellion and she, like the missing Alessia, was a priestess at Our Lady of the Sorrowful Vision. She explained that she knew that Rufus and Elsabeth would be at the tavern because as a priestess dedicated to the saint of foresight she had been blessed with a vision of herself meeting the pair in this particular establishment. She also had a vision of taking the duo back to her church to help them solve the mystery that was currently before them.

At Our Lady of the Sorrowful Vision, Shira was able to add more information to the developing picture. She informed Elsabeth and Rufus that in the catacombs beneath the church lurked an uncanny older temple, and that Alessia had been occupied with researching its origins before she disappeared. She also noted that Rising Leaf, Tobias, Valor, and Maya has all come to the church bearing warrants issued by the Church allowing them access to the old temple complex. Rufus was able to discern that the writs were clever forgeries, but it was clear that all of the missing people had been lured into the old temple's depths.

Rufus and Elsabeth decided that they needed to venture into the old temple in hopes of finding their friends. The brick and stone of the catacombs gave way to strange material; the old temple was comprised entirely of glowing crystal that had been etched with draconic design elements. Like the book they had handled earlier, reptilian eyes would blink open on the walls, floor, and ceiling to spy upon them. Surprisingly, they were greeted by the missing priestess Alessia Baseer in the first chamber of the complex.

Alessia said she was there to welcome them to the temple on behalf of "the prophet" and that all of the people they were seeking were already deep in spiritual contemplation with him. She said they were free to explore the temple as they wished, but she did warn them against the dangers of the temple's hall of mirrors and its crystalline dais. With that, she left them to their own devices and entered her bedchamber. Rufus got the impression that whatever was speaking through Alessia and piloting her body was not the woman herself. Moreover, Elsabeth noticed a fresh scar that started near the woman's left collar bone and descended below her garments. Seeing an opportunity to gain some valuable, if grisly, information, Rufus burst through the door of her bedchamber and knocked the surprised priestess unconscious with a single blow. Alessia was then dragged out of the old temple to where Shira was waiting with four guards. With Shira waiting to provide divine healing, some impromptu exploratory surgery was performed, which determined that the heart beating in Alessia's chest was a shriveled, desiccated organ that smelled of resin and herbs--it was likely not her original heart.

Upon returning to the crystalline temple, Rufus and Elsabeth encountered several rooms of strange phenomena, including a room full of floating mirrors shards (when one touched Elsabeth, she had a vision of herself being sliced open by an unknown assailant) and a domed room where the ceiling gave a view of a far away land of shifting sands and pyramids (gravity was suspended in this chamber, causing the duo to float in mid-air). In another chamber the duo found the corpse of Maya Sadaar. She was lying in a pool of dried blood with a dagger and a strange object laying just out of reach, as if in death she had released her grasp on both. The object proved to be a withered pancreas that smelled of resin and preserving herbs. It appeared as if Maya had realized that she had a monstrous organ transplanted into her body and killed herself digging it out.

Also found in Maya's pocket was a sheaf of notes that detailed a way to ensure that a mummy could not reform itself after the destruction of its corporeal form: its heart would need to be destroyed to keep it from returning. This knowledge would soon come in handy. After traversing a room full of floating motes of light, the pair found themselves in another chamber in which gravity was suspended. Floating in the middle of chamber was a figure that Rufus immediately recognized: it was Saretomet, the mummy that the SCD had set free in a prior adventure! Having noted the power of the group who had feed him, Saretomet had added them to the list of mortals he wanted to take over by transplanting his organs into their bodies. Rufus was the last "sacrifice" on his list.

The ensuing battle against Saretomet was harrowing. Saromet's hit the pair with some absolutely diabolic spells that left them greatly weakened or poisoned. A massive punch from the mummy left Elsabeth on the verge of death, but Rufus poured a healing potion down her throat in time to save her. A good move, too, as Elsabeth soon had Saretomet impaled on her blade...after which he promptly turned into a pile of dust. However, his dissolution also left behind a pile of healthy organs: a heart, a brain, an eye, a pancreas, and a pair of kidneys. The organs were taken by Elsabeth in hopes that they could be returned to their rightful owners.

After the brawl with Saretomet, Rufus and Elsabeth continued to search for their missing friends. Inside a chamber that contained a number of canopic jars and a crystal sarcophagus, they were met with Leaf and Tobias, who were still clearly under the mummy's control. Another fight broke out, with the possessed Tobias unleashing bolts of psychic fury and Leaf using his peerless martial arts skills against his compatriots. Leaf managed to knock Elsabeth unconscious, but in the end both Leaf and Tobias were knocked out without killing them.

With their friends unconscious, Elsabeth and Rufus were free to explore the chamber. The canopic jars held mummified organs. The question of Lady Valor's whereabouts was soon answered when she appeared, with an eye not her own glaring out of her face, and attacked the duo. A command spell from Elsabeth caused Valor to drop her sword; Rufus promptly knocked her out as well. With Saretomet vanquished, at least for the moment, and their friends and their organs collected, Rufus and Elsabeth elected to stop exploring the temple and get down to the dirty business of restoring their allies.

The unconscious Leaf, Tobias, Valor, and Alessia were taken to Creedhall's medical college. The surgeons there worked in tandem with priests from Our Lady of the Sorrowful Vision to remove the mummy's organs from the unconscious victims and replace them with the originals. Once the surgeries were completed and everyone was stable and on the road to recovery, the mummy's organs, including his heart, were gathered in a metal pail and set afire. As Saretomet's chance to rejuvenate himself was destroyed, his voice came on the dying wind, promising that the SCD could not escape the greater doom he had foreseen in their future...