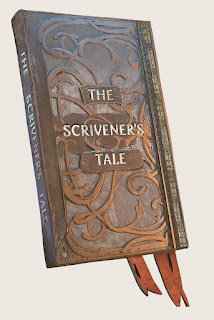 I've been running the adventures in Candlekeep Mysteries lightly reskinned for my Krevborna setting. The characters are all employed as members of Creedhall University Library's "Special Collections Department," aka adventurers. This is a recap of what happened in "The Scrivener's Tale." Fair warning: spoilers lurk below.

As Gnargar and Elsabeth reported for work at the library, they found their morning interrupted by screams coming from the campus grounds. Peering out a window, they saw a dark elf mage astride a malformed, bulge-eyed giant. As this uncanny pair neared the library, they attacked the scholars and students in their path with crackling bolts of lightning and a massive stone club, respectively. Elsabeth and Gnargar rushed to the defense of the university. Gnargar was able to stun the giant with a martial arts technique while avoiding the drow's blasts of electricity. The drow was knocked unconscious, but as he fell he uttered a spell in a strange voice; it began to rain inky black fluid, and where the liquid touched the gathered crowd's exposed skin, it formed miniscule words written in Sylvan.

Although none of the afflicted had knowledge of the Sylvan language prior to this event, they all discovered that they could now read it. The words marked on their flesh seemed to be part of a tale of some sort. They all also disconcertingly found that they cast no shadows! An expert in Sylvan literature, Professor Teles Ahvoste, was summoned to examine the strange words and hopefully make sense of it all. After arranging the afflicted in a rough order so that the bits of the story could be read in sequence, he determined that the words were from a book called The Scrivener's Tale, a story about an archfey of the Unseelie Court named the Princess of the Shadow Glass who had been driven out of the Feywild by the Queen of Air and Darkness.

Once the drow had been revived, he was questioned. His name was Eldrath, and he was a disciple of the Princess of the Shadow Glass. He claimed that the Queen of Air and Darkness was a terrible tyrant who had warped the nature of the Unseelie fey with her cruelty and that freeing the Princess of the Shadow Glass would allow her to wage a war against the Queen's evil in the Feywild. He was under orders, always delivered to him in dreams, to obtain The Scrivener's Tale because the Princess was trapped within its pages. He was to take the book to a place where the binding magic could be dispelled. Unfortunately, the whereabouts of that place had not yet been revealed to him by the Princess.

That night, both Gnargar and Elsabeth dreamed the same dream. They fled a battle between inhuman soldiers by hiding in a ruined tower. Inside, the found a spear thrust into the ground. Hanging from the spear's crossguard were two crowns: a silver circlet and an adamantine crown meant to be worn over a helm. Encircling the spear's blade was another crown--this one made of gold and inlaid with emeralds. As they reached out to claim the crowns for themselves, they awoke. Consulting with Teles Ahvoste revealed that historians believed there was a civil war among the Lilitu known as the War of the Three Crowns. This was culminated in a battle for a city called Delimbria, which was destroyed in the conflict.

Elsabeth and Gnargar decided to head for the ruins of Delimbria in hopes of finding more information on the Princess and the strange writing that had appeared on their skin. They took a wagon and decided to bring Eldrath, Teles, and The Scrivener's Tale with them on the trip. One night, as they made camp, a shadowy figure approached their fire--they were privy to an audience with a vestige of the Princess of the Shadow Glass herself! The Princess of the Shadow Glass commended them on following the trail to Delimbria. She also informed them that the words on their skin was part of a curse laid by the Queen of Air and Darkness meant to prevent anyone from freeing the princess from her book-bound captivity--and that the curse would prove fatal if it were not removed. Before she departed back into the darkness, the Princess promised to remove their curse...as soon as she was released from the book, of course.

When the group arrived at Delimbria, they immediately saw the ruined tower that featured prominently in Elsabeth and Gnargar's dream. At the foot of the tower was a stone spiral staircase leading down into the earth; the walls of the shaft were etched with images of inhuman Lilitu monarchs donning the crowns from their dream. Excavating a collapsed doorway in the chamber at the bottom of the stairs allowed them access to the rest of the underground complex. From the crumbling and ancient desks they discovered, the complex appeared to be some sort of scriptorium. In their explorations, they uncovered a tunnel leading to an underground waterfall (complete with the skeleton of a previous explorer), a stone door with no handle that had three glyphs etched into its surface, and a vast chamber with the image of a dragon etched into the wall.

Examining the draconic image more closely, the group found that an image of a Lilituan abjuring it with an iron rod accompanied it. The iron rod was not part of the etching; it was in fact a real iron rod embedded in the wall. Also, the dragon's eye was an actual hole of some considerable depth. Unable to resist the temptation to toy with the possibilities presented here, Elsabeth pried the metal rod from the wall and inserted it into the hole in the dragon's eye. Formless darkness began to pour out of the rod, pooling on the stone floor. One great taloned leg, then another, then a horned reptilian head pulled itself from the inky pool--a dragon emerged from the mysterious morass!

The dragon had been imprisoned within the wall by the Lilitu, but now that it was free it demanded that the group stand aside so that it might leave and "feast." Unwilling to unleash this creature on an unsuspecting world, Elsabeth and Gnargar pretended to step aside so that they could better attack the dragon from the rear. Enraged at being hindered in its hellish purpose, the dragon unleashed a blast of caustic acid that injured Elsabeth and Grargar, nearly killed Eldrath, and absolutely dissolved Prof. Ahvoste. The dragon's teeth and claws proved extremely dangerous, but Elsabeth was able to ram her sword into its chest. As it reared in pain, it began to dissolve. As her sword fell to the ground, Elsabeth caught it midair.

Once the dragon had been dealt with, Gnargar and Elsabeth decided to investigate the glyph-warded door further. As they examined it, a spectral Lilituan appeared and introduced himself as "the scrivener" who had written the book that the Princess of the Shadow Glass was contained in and had engineered the ritual that had trapped her within it. When asked about the Princess's motives, compared against the motives of the maligned Queen of Air and Darkness, the scrivener said that both were forces of ill and that it was impossible to weigh them against each other. At this point, Gnargar and Elsabeth's suspicions about the Princess's desire to be released from her prison were all but confirmed--she was not the freedom fighter she claimed to be.

However, as they were victims of a curse, which they were more and more sure originated with the Princess and not the Queen, her release might be the key to saving themselves. The scrivener confirmed this: the only way to free themselves would be to release the Princess of the Shadow Glass using a ritual, kill her, and then finish the ritual before she could reform from the stuff of shadows. Elsabeth and Gnargar decided to take their chances with the path that the scrivener proposed; however, since they knew that Eldrath was still firm in his allegiance to the Princess, they knocked him unconscious before having the scrivener unseal the door to the ritual chamber so that they might confront the archfey who had guided them to this point.

Following the scrivener's instructions, The Scrivener's Tale was placed at the center of a ritual circle carved into the floor of the chamber and the candles around its perimeter were lit. A presence emerged from the book, taking the form of a tall, willowy fey woman whose silver hair trailed off into wisps of smoky darkness. Elsabeth and Gnargar were right not to trust her; she announced her intentions to kill them and conquer the Feywild! The Princess of the Shadow Glass had a number of tricks up her sleeve; she caused Gnargar and Elsabeth's stolen shadows to attack them, she commanded the long mirrors hung in the chamber to shatter and their shards to explode outward like glass-packed grenades, and she used tendrils of darkness to pull the duo through one mirror only to be spat out another. Ultimately, the two librarians were triumphant. The Princess was slain and the candles snuffed--ensuring that she would trouble the world no more.

Before they left, Gnargar and Elsabeth loaded the many ancient Lilituan manuscripts found in the ritual chamber into their wagon...for which they would be rewarded with extraordinary wealth by the library's Special Collections Department.