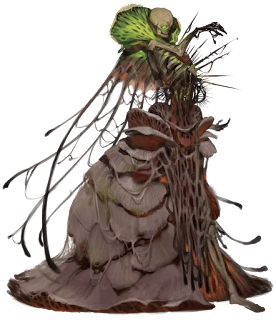 I've been running the adventures in Candlekeep Mysteries lightly reskinned for my Krevborna setting. The characters are all employed as members of Creedhall University Library's "Special Collections Department," aka adventurers. This is a recap of what happened in "Xanthoria." Fair warning: spoilers lurk below.

The troubles began when the Bone Moon turned a sickly green, a pernicious infection spreading across its surface. Then, the meteors came. Scholars who studied the sky from Creedhall’s observatory claimed that the meteors seemed to originate from the darkest part of the moon’s infection. Where they fell to earth, the meteors left behind craters filled with mottled green and purple fungal matter.

The researchers who studied this fungal stain were the first to become infected. Their bodies became infested, they sprouted hideous growths comprised of mold, mildew, and mushrooms. As their bodies were taken over, so too were their minds usurped; the fungal disease transformed them into ravaging fungal ghouls who spread the sickness throughout Creedhall and perhaps all of Krevborna. The afflicted could say nothing save chanting one word over and over: Medlozka.

The doctors of Creedhall were unable to treat this ailment, and the Church’s agents were also powerless to cure it. The fungal infection hit to home for our heroes. Lady Valor, who had been staying with Elsabeth while recuperating, fell victim to it. Their superior at the library, Horatio Lupa, also fell prey to the illness and had to be locked away in a library vault. The only avenue unexplored was to fly the Old Tower to the moon and investigate the source of the corruption.

Our champions loaded supplies into the Old Tower, fired up the rockets hidden beneath it, and commanded it to take them to the Bone Moon. The source of the fungal plague was obvious when the moon came into view: its white, rocky surface was infested with fungus with a dark lump sitting like a tumor in the center of the infection. The tumor had a number of silo-like tubes projecting from it--possibly used to launch the meteors at Creedhall. That tumor-like structure proved to be a natural cave that had been taken over by mold, mildew, and mushroom.

Inside the cave's entrance, they could hear the sound of a woman weeping off to their left. Reconnoitering the area, Gnargar found a woman, whose body was encrusted with fungal matter, crying in the fetal position. She revealed that her name was Thalia and that the cave complex was the headquarters of a cult who had come to the moon to fulfill their leader's demonic plan: join all life into one fungal hivemind to put an end to individual cruelty. Thalia explained that the cult was lead by Dahlia Medlozka, but she couldn't remember how many members of the cult remained. However many there were, they were sure to be warped into fungal forms.

With Thalia in tow, the group explored the cavern complex. Toward the back of the first cavern, they found two semi-transformed cult members suspended from a web of mycelia. They discovered an alchemy lab, complete with a moldering book that explained the process for transforming rocks into biological weapons that could be fired at the world to spread the fungal disease far and wide. Continuing on, they found a chamber used in Dahlia Medlozka's experiments in fusing fungus with human flesh. This room held a number of cages, each holding a corpse. Thalia was distraught to find that her friend Boris, a fellow member of the cult, had died from the experiments that had been inflicted upon him.

They also stumbled upon a ring of lurid giant mushrooms. When Gnargar stood in the center of them, he had a vision of a post-apocalyptic world overrun by fungi. In the vision, a huge woman made of mushrooms and rot grabbed him, her tendrils boring into his face. He tore her hand off, but this did not faze her. Before he was released from this horrid vision of the ruinous future, she leaned close to Gnargar's ear and whispered "Soon." For the rest of his time within the caves, Gnargar's perceptions would be periodically and momentarily overlaid with the sight of this fungal hell.

Upon returning to the central chamber, the group spotted two large vulture-headed demons and a fungal cultist descending from the mycelia web. A difficult battle ensued, but the party vanquished their foes and continued exploring after licking their wounds. After traversing a long corridor that rained dangerous necrotic spores down upon them, the group found Dahlia Medlozka, her humanity forever lost to the transformation into the fungal equivalent of a lich, vivisecting a deer upon a stone worktable. A young boy in a cage was by her side, creepily eager to see Dahlia at work with her knife. When Dahlia noticed the group's approach, she commanded a massive mushroom-man and a boar-headed demon to kill them.

Rufus engaged the fungus-encrusted boar demon, keeping it at bay, ferocious beast to ferocious beast, as the other scrambled to fight their way toward Dahlia. Dahlia cast a spell that drew the life from the boy in the cage, rendering him a withered husk and creating a sphere of magical protection around her. When Aula tried to charge Dahlia, she found that she could not move through the sphere. Instead, she threw her dagger at Dahlia; infused with a saintly relic, the dagger caused Dahlia to lose concentration on her spell, and the sphere shattered.

Dahlia proved to be a powerful druidess. She conjured fire that surrounded each member of the party. She threw bolts of roiling necrotic energy. She attempted to steal their lifeforce to empower her own. She grabbed Aula's stone golem, channeled horrible power into it, and caused it to shatter into rubble. She also caused a pile of fungal matter to animate as a hulking, fetid mass. The boar demon and the mushroom-man were dealt with, so Rufus now held the shambling mound in combat. Gnargar smashed Dahlia with his nunchaku, dislodging her lower jaw before landing the killing blow. Freed from that melee, Elsabeth flew to Rufus's side and ended the fetid mass's unholy existence.

Searching the stone table, the group found another rotting book that detailed both how to create the biological weapons Dahlia had crafted and how to brew a medicine to treat the illness. However, reading the book also unveiled a hideous truth: as a lich, Dahlia would return to unlife eventually if her phylactery was not located and destroyed. A search of the rest of the cave complex commenced. In Dahlia's former bedroom, they found the woman's diary, which disclosed that Thalia was the phylactery into which she had placed a vital part of her soul.

Thalia was reluctant to give up her life. The group didn't really give her an option, however. They viewed her life as a necessary sacrifice so that the world might live. Ultimately, Thalia was convinced to lay down her life for the greater good. Before accepting Elsabeth's sword through her heart, she made the group promise that they would take her and Boris's bodies back to Krevborna and give them a proper burial.

With their tragic burden in tow, the group boarded the Old Tower and began the journey back to the library. As they left, they used the tower's elemental cannon to destroy the cave complex's silos. Upon returning, they gave Dahlia's books to Creedhall's doctors, who were able to affect a cure for the afflicted.

Throughout their time with the Special Collections Department, our heroes were librarians, adventurers, and sometimes even agents of chaos guided by a skewed moral compass. Their adventures took them to strange places, even into the wilds of other planes. They encountered the uncanny, nefarious, and unusual, such as a demonic nursery rhyme, a spa overrun by evil, and a lurid fairytale come to life. They slew a mummy lord, a beholder, and more than a few cults. They saved a few innocents and managed to keep a fair number of fell tomes out of the reach of the foolhardy.

But in the end? In the end, they had saved the world.