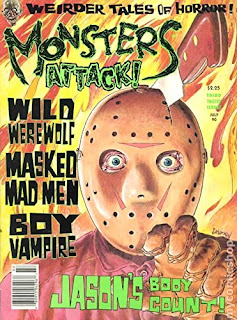 Monsters Attack! was a short-lived, magazine-sized comic put together by the then-editor of Cracked magazine. Each issue features a number of horror comics, as well as articles about horror movies and all things gruesome. I got my hands on the first issue when it debuted, but the pharmacy I bought it from never seemed to get the following numbers. Now that I have a copy of the Monsters Attack! Ultimate Collection, I plan to go through the series' five-issue run and briefly review the comic content from each issue. I've covered the first issue here and the second issue here, so let's move on to the contents of the third issue. 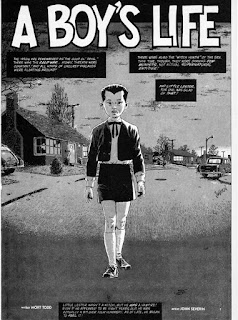 An Eddie Munster-looking vampire boy finds himself in a new town, and all the potential meals are terrified of him even though they have no way to know that he numbers among the undead! So, he takes the easy way out and attacks a crippled boy. Yeah, you read that right, a crippled child. Unfortunately, the crippled boy had polio...which is apparently transmissible to vampires. This also explains why everyone was running away from him; the townspeople were scared of polio-bearing strangers!

A mad scientist invents a device that allows him to take on the appearance of a wealthier man so he can withdraw money from said wealthy man's bank account. Everything goes off without a hitch, until the mad scientist's robotic servant tires of playing second-fiddle to a two-bit criminal, seizes control of the face-manipulating device, and turns its master into a cartoonish grotesquerie.

This is a wild one. An incarcerated hypnotist has mastered the art of manipulating the biological cells of the human body. He transforms three of his fellow inmates into monstrous forms to aid in his jailbreak. Ultimately, he escapes the prison by changing himself into a bizarre, pterodactyl-like form and flying away. The narrator...enlists the aid of the Audubon society to bring him to justice (!!!). This story really makes very little sense, but you can't help but be entertained. 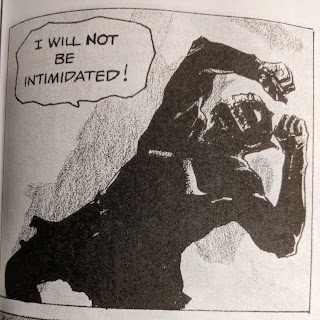 "The Wake of a Monster"

Story and art by Pat Boyette

An invisible demon, who doesn't really understand what he is, wanders around snapping necks and otherwise causing trouble for humanity. This is a weird, comedic take on...something. The image to the left amusing me unduly, for reasons I cannot adequately explain.

A cop is aided by the FBI in tracking down a seemingly supernatural killer. It turns out that one of the FBI agents is a werewolf. Fight fire with fire, I suppose! This is another story in the Monsters Attack! run that makes excellent use of moody black and white art.