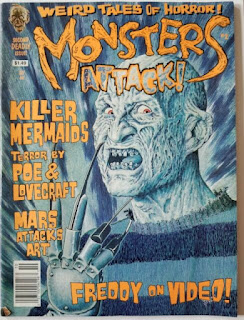 Monsters Attack! was a short-lived, magazine-sized comic put together by the then-editor of Cracked magazine. Each issue features a number of horror comics, as well as articles about horror movies and all things gruesome. I got my hands on the first issue when it debuted, but the pharmacy I bought it from never seemed to get the following numbers. Now that I have a copy of the Monsters Attack! Ultimate Collection, I plan to go through the series' five-issue run and briefly review the comic content from each issue. I've covered the first issue here, so let's move on to the contents of the second issue. 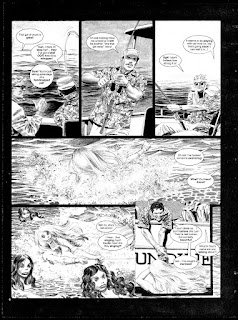 A couple guys catch a mermaid and manage to haul her back to an aquarium, somehow without the one guy's girlfriend noticing. Of course, this is a murder mermaid who kills the aquarium owner (and a hapless employee sent to clean the tank), even though the guy has resolved to set her free after he has the experience of swimming with her. The remaining friend decides that it's time to commit mermaid genocide (despite the fact that they kidnapped the mermaid for what was essentially slavery), arming himself with underwater grenades and poison. This is a pretty weird story; didn't really hit the spot.

Story and art by Steve Ditko, finishes by Mort Todd

A man experiences the surreal nightmare of literally falling to pieces, both as a mortal of flesh and blood and as a robot. It turns out that he was an anti-robot activist who detonated a bomb to destroy a scientist's automatons--and killed himself in the process. The scientist preserved the activist's brain, keeping it alive in a vat of fluid where his mind continually experiences the horrors of falling apart over and over again. I love that the explosion somehow knocked his undamaged brain clean out of his skull.

This one is an adaptation of H.P. Lovecraft's story of the same name. A nameless ghoul thinks he is climbing a tower, but in reality he is nearly ascending out of a charnel house. The reception he receives when he bursts into a party of revelers is apt, as is his reaction to his own hideous visage in a mirror. Now that I think about it, the story is fairly prescient; it's really the tale of an incel leaving mom's basement, isn't it? Anyway, the artwork in this piece really is stellar; it leans heavily on blacks and negative image and really captures that Weird Tales vibe. That said, apparently the decision to change the original pages to a negative inversion was made by the editor; although it looks cool, I'd hate to think this was presented in a way that the artist didn't intend. 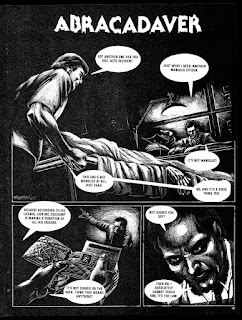 This is probably the most intricate story in the issue, and again I think the best has been saved for last. A mortician on the make doesn't want to carve up an unblemished corpse for its organs, despite the presence of an organ donor's card, so he substitutes organs from other corpses so he can use this perfect one for an altogether stranger purpose: he freezes the corpse, then slices it into sections for a Body Worlds-style exhibition.

Unfortunately for him, the corpse in question belonged to a powerful sorcerer who had planned to take over the bodies of the people who were to be given his organs as transplants. His plan thwarted, he reanimates as slices of his original body that move as one! That is a hell of an idea. The dark, moody art style really works well here.

Note: This issue originally also included an adaptation of Edgar Allan Poe's "The Cask of Amontillado," which is not included in this "Ultimate Collection." That's unfortunate! I wonder if Mort Todd couldn't get the rights to it.