The House of Lament, Part Two 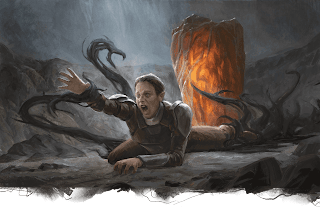 I ran The House of Lament, the adventure included in Van Richten's Guide to Ravenloft. I covered the first bit of it here, and this is the conclusion. I plan on reviewing my overall impressions of the adventure in a separate "post-mortem" post.

The characters awoke from their nightmares to find that Katherine, their bard companion, had disappeared in the night. The mystery of her whereabouts had to be set aside in pursuit of their other goals: finding the witchstone and ridding the house of evil specters.

The party first explored the house's third story. They found two doors that were magically warded against entry. When touched, the doors displayed a symbol resembling a kite shield. When Rolo rushed at the door, trying to batter it down, he was repulsed by a dangerous blast of energy.

One of the servants' rooms proved to have been the domicile of a very pious person, as it was decorated with small devotional figurines of a woman bearing a kite shield that resembled the one that appeared on the warded door. Closer examination revealed that the shield was decorated with a sprig of belladonna, a feature not present on the symbol.

In this room they also found a bag of holding sitting within a circle of human teeth and fingernails. Gnargar's love of looking behind paintings also paid dividends; they found a secret alcove hiding a lockbox--the key to which they had found earlier. Inside the box was a medallion bearing the sigil of the Keepers of the Feather.

Remembering that there was a conservatory down on the first floor of the house, the group made their way back down in search of belladonna. The plants had all long died in the conservatory, save for one: a belladonna plant rich with fat, black berries. They took a sprig of belladonna, returned to the warded door, touched the sprig to the shield symbol, and gained entry. Inside, they found the remains of what appeared to be a nursery.

Beyond the nursery was a children's bedroom, where the group encountered the ghosts of the Halvhrest children and the skeletal remains of their mother in a rocking chair. The spectral children explained that their mother had warded the room to keep them safe from "the hungry things," the malicious ghosts inhabiting the house. However, Esme had a theory: now that the group had breached the ward on the door, the children's ghosts were now vulnerable to predation by the evil spirits within the house. This made solving the haunting a more pressing concern.

The group then made their way up to the widow's walk, to light a candle there as one of those ghosts they contacted during a seance had directed them to. A storm was still raging outside, so the party tied a rope to Rolo as an anchor and sent Gnargar out to leave a lit candle on the witchstone. At first, the candle went out in the wind and the rain, but then the wick flared with a strong green light and the runes carved into the witchstone also blazed with an eerie glow. Ludovico cast comprehend languages and learned that the stone was something of a pact: it guaranteed the witches who travel in the night a place to rest, but it also stipulated that if a lit candle was left on the witchstone it would summon aid from the witches of Ravenloft.

It was now time to venture beneath the house. The basement led to a sublevel that would have been beneath the original castle that stood on the grounds. They uncovered a pit leading further down into the depths; through the goggles that Esme had given him, Gnargar could see a writhing mass of tormented spirits rising from it. With few other options presenting themselves, the group tied ropes to the boulders circling the pit and descended.

The walls of the cavern undulated with the tortured faces of ghosts who were trapped within the house. At the center of a pool of dark, inky fluid stood an amber monolith. The monolith gave off a terrible light, and a dark entity squirmed within it. As Rolo approached the monolith, the air grew cold and the imperious red-headed woman he had seen in his dreams materialized in spectral form before him. She declared to the monolith that she would sacrifice the interlopers in return for her own freedom!

The ghostly woman plunged her sword into her own stomach and let loose a terrifying wail. Esme dropped immediately at the horrid sound. The rest of the group split their efforts between fending off the ghostly warrior woman and attacking the monolith. Unfortunately, cracking the monolith let loose dark tendrils that also joined the melee. Speaking of joining the melee, a witch flew down the pit to aid the party; she has been summoned by the candle they left lit on the witchstone. Although she managed to do a bit of damage to the shadowy tentacles, she was also knocked unconscious rather quickly.

Ultimately, our heroes carried the day. Ludovico's wand of magic missiles tore through the warrior woman's ghostly form. Rolo kept everyone on their feet with his healing magic. Gnargar shattered the monolith with a combination of kicks and punches. With the monolith destroyed, the inky water in the pool receded, revealing the bones of all who had come before in the attempt to purge the house of evil. Returning to the house proper, the group found it quiet and devoid of ghostly presences; the ghostly children were also absent.

After recuperating and gathering up their possession, they all ventured outside the house. As they waited for their carriages to return, they saw the ghostly forms of the two children join their mother in the Mists as it receded like the tide pulling away from the shore.