The House of Lament, Part One

I ran The House of Lament, the adventure included in Van Richten's Guide to Ravenloft, and here's how it went.

Rolo, Gnargar, Ludovic, and Katherine were all hired to investigate the legendarily haunted house known as "the House of Lament" by a mysterious benefactor named Professor Vole. When they arrived at the dark, delipidated three-story house, they discovered that although each of them had been given a key to the front door, its lock required five keys to open. Undeterred, they found an unlocked side entrance and made their way into the house through the debris-strewn kitchen. They also made an odd discovery: there was a freshly baked cake with the oven, despite the oven being cold, covered with dust, and evidencing disuse.

Exploration of the house was interrupted by the arrival of a fifth investigator: Esme, a Vistani who had brought crates of books, mechanical equipment, and foodstuffs to aid in the endeavor. Esme handed out a few devices that would prove helpful, such as an a spectral voice amplifier, an aurascope, and apparitional goggles.

Esme also proclaimed that the parlor of the house was warded against malign ghostly intrusion; as a medium, she held several seances in the room so that the characters could question a few of the spirits trapped within the house. Esme told them that she could perceive three entities that were willing to speak to the party, though each only appeared as a dim, shadowy figure: there was a knight, a mother, and a woman who had played three roles over the course of her life--princess, warrior, and revenge seeker. 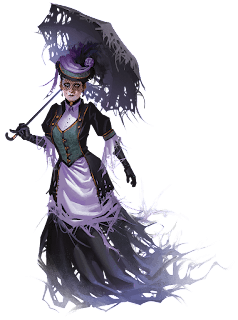 The group chose to communicate with the mother and the tripartite woman. The spirits answered their queries as best they could, and also sent to exorcise some of the dangerous spirits from the house. They were alerted to the presence of "the Chimney Witch," a spectral hag, and in the confrontation with her a long, many-elbowed arm reached out of the oven and pulled Gnargar into the flames. Nevertheless, she was delt with accordingly and purged from the House of Lament.

They also defeated the ghost of a suicide known as "the Leaper." The Leaper attacked them on the stairs of the house's tower; he used concussive blasts of force, not unlike the wind that would rush by a suicide as they plummeted to their death, to attempt to knock the group off their stairs. Gnargar was again targeted, but a well-placed featherfall spell from Ludovico saved his life.

At the top of the tower, the group found a set of blood-red ringmail armor that was curiously unaffected by exposure to the elements. The armor lay within a strange symbol that was later identified as the insignia of the Keepers of the Feather. Rolo donned the armor and felt a spectral presence near at hand, watching over him.

The group were also in pursuit of a witch stone, a rune-inscribed flat stone that was held by local superstition to discourage witches from laying a curse upon one's house. The witch stone remained unfound as they closed their first night of exploration.

They made their sleeping arrangements in the parlor. Although the parlor seemed safe from ghostly attacks, it did not protect the group from bad dreams. One dreamt of a knight wearing a skull-faced helm laughing and lounging on a throne as his subordinates walled a man inside an alcove; one dreamt of a woman in blood-red armor forcing her soldiers to march toward a castle on a hill in the midst of a terrible storm; one dreamt of the same woman on her knees, howling into the night as shadows consumed her; one dreamt of the woman in blood-red armor running a sword through the knight with the skull-faced helmet and then going on a murderous rampage, killing everyone she could find in the castle.

What do these dreams signify? Where is the witch stone? Perhaps we will find out, if there is a reprise for this adventure.