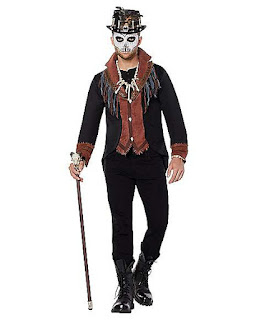 I got a chance to playtest a new version of Planet Motherfucker for a couple players last week, here's what went down:

Marion and Violet had been tracking Papa Juice Tank and Trixie LePoon, two notorious outlaws, and had nearly caught up to them on numerous occasions, but the duo managed to slip away. They had heard that Trixie and Juice Tank had holed up in a small mining town called Contrition in the Militialands. The town stood at the foot of a mine bored into the mountains; off to the side was an abandoned sawmill and a foothill strewn with gravestones and crosses serving as the local burying grounds. As they approached Contrition, they could see that it consisted largely of abandoned buildings, dotted here and there with businesses (mostly bars and brothels) with lit neon signs.

Of course, they were immediately jumped by a couple of hoodlums, one wearing a Limp Bizkit jersey and the other sporting a fried chicken bucket as a hat. "Your money or your wife," cried the Limp Bizkit fan, brandishing a pistol. The two would-be thugs were quickly dealt with; Marion and Violet moved on into Contrition.

The first stop in their search to find Juice Tank and Trixie was a bar called The Road to Ruin. The Road to Ruin was a rough bar catering to the local miners; a bar brawl seemed to have sprung up solely out of boredom and a lack of entertainment options. A group stood nearby the fight, cheering on the combatants. Among that group was a man who looked like Papa Juice Tank picture in the wanted poster in their possession: he was tall and thin, wearing a stylish pimp coat, a necklace of shark teeth, and a top hat decorated with a skull emblem.

Marion and Violet sidled up to Papa Juice Tank and took him by surprise. Juice Tank got a gut-punch for his trouble, then he reached into a pouch of "graveyard dust" at his waist and blew it into Violet's eyes, blinding her. Marion was about to clobber Juice Tank again when he felt a tap on his shoulder. He turned his head and was immediately popped in the face with the butt of a shotgun by a guy with mutton-chop sideburns, a ten-gallon hat, and leather chaps. As Violet and Marion turned their attention to the interloper, Papa Juice Tank took the opportunity to flee. The interloper was dealt with by a combination of a beer bottle broken across his face and a heft punch to the jewels.

Unfortunately, when our heroes finally got out to the street, there was no sign of where Juice Tank had gone. They scoped out an unpopular brothel called The Cootchie-Coo, Keno Harry's House of One-Armed Bandits, a noodle bar called Miso Horny, and the local mines. Papa Juice Tank was not hiding out in the mines, but the duo discovered that the miners of Contrition were not extracting anything as mundane as gold or silver--they were mining glowing green rock that pulsated with light and felt cool to the touch. Violet stuffed a few fragments of the weird rock into her pockets for later examination.

Waiting for them at the entrance to the mine was Ten-Gallon Hat. He was still walking funny from the pummeling he took to the nads previously, and he was insistent that Marion and Violet were not going to steal the bounty on Juice Tank and Trixie out from under him. He let fly with a blast from his shotgun, but the pair laid him down for dirt nap. Marion took the badge he was wearing, which turned out to be the prize from a box of Buckaroo cereal.

Their next stop was VoltzMart, the local convenience store. As soon as they walked in, the proprietor turned a paranoid shotgun on them. Perhaps a little frustrated by their hunt for Juice Tank, Violet and Marion were not having it. Marion grabbed the barrel of the shotgun and laid the guy out with a punch. After tying him up and rousing him back to consciousness, he was questioned quite forcefully. The man told them that Contrition had formerly been devoted to logging and lumber production until Mr. Eyres, the owner of the town's sawmill, discovered veins of the strange glowing rock in the mountains. After which, he immediately closed his sawmill and employed his workers as miners. Although the man didn't know what the rock did or what special properties it might possess, he did let slip that men came into town to cart away the rock--and that the men wore what sounded like hazmat suits of some kind the whole while.

Violet promptly discarded the slivers of glowing rock she had taken from the mine, just in case.

The man also told them that Mr. Eyres still lived in the depths of the abandoned sawmill. Deciding that they need to have a chat with Eyres, they descended into the sawmill's creepy basement. An eerie green glow coming from a room in the basement seemed to call to them. Inside, they found old man Eyres hooked to an elaborate machine. They looked on in horror and awe at the monstrosity that was Mr. Eyres. Unphased by their entrance, Eyres answered their questions. When asked about the glowing rock, he showed them how it served to power the machines he was hooked up to and revealed the glowing patches of mutant skin on his body that were doing battle with an end-of-life illness to keep him alive. He claimed that the rock was a lucrative venture, and that his business partners shipped the rock to other ailing and wealthy oligarchs through America.

Ultimately, Eyres point the duo to Boot Hill as Juice Tank's likely plan was to use his voodoo to raise a little backup from the dead. They set off to the cemetery, only to find that Papa Juice Tank was headed back down to find them--with a posse of zombies and glowing mutant miners in tow. Violet revved up her chainsaw and made a mess of Juice Tank's zombies. The battle was joined by a whip-wielding Trixie LePoon, but Violet shredded her whip, rendering her mostly defenseless--except for her steal-toed cowboy boots. Juice Tank offered prayers to his voodoo gods and called down lightning strikes against our heroes, but a well-placed shot took him down. Their morale broken, Trixie and the remaining miners surrendered.

Papa Juice Tank's head was taken to fulfill the bounty and Trixie was tied up to be marched out of Contrition to face justice for her crimes. But where had the strange rock from the mine been going and who was being changed by its strange, and perhaps unholy, properties?