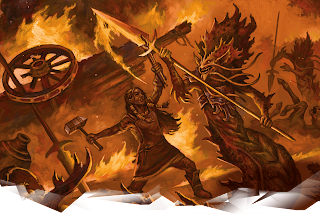 I've been running the adventures in Journeys Through the Radiant Citadel as part of an open table campaign on my Discord. Without further ado, here's how "Trail of Destruction," the seventh adventure, went for my group.
Dramatis Personae

Dreams of Fire and Ash

The current dream that was afflicting Horatio and Brother Albany was fairly simple, as far as visions granted by a strange angel go: they dreamed of a isle on which all the volcanoes were erupting at once, resulting in a flood of lava destined to wipe out the entire population. They awoke certain that this was no natural disaster; with their intervention, the catastrophe could be averted. And so they traveled to the isle of Telepec in Valachan.

As they traveled the road to one of Telepec's towns, they began to smell smoke. Rounding a bend in the path revealed a horrific sight: the rain forest was smoking due to the flames emanating from a creature with a humanoid body and a long, snake-like tail. The creature was accompanied by two giant snakes, each also wreathed in flame. The creatures had overturned a cart full of food, flowers, and gilded items belonging to three figures in priestly vestments. Now that the wagon was upset, the creatures were attacking the clerics. Unwilling to merely watch the carnage, Brother Albany and Horatio entered the fray and dealt with the attacking monstrosities.

After helping right their wagon, Horatio and Brother Albany spoke to Sister Amelia, the leader of this pious expedition. She explained that they had set out to leave offerings to the goddess Ezra at a shrine known as the Gate of Illumination, in hopes that the offering would cause the goddess to intervene and end both the earthquakes and the attacks by monsters that had been plaguing their town. The attack by the snake-like creature had convinced them to turn back.

When Horatio and Brother Albany expressed their willingness to look into the matter further, Sister Amelia drew them a map of the vicinity, pointing out the Two Gods Observatory, a town called Xotol, and the location of the Gate of Illumination. On the chance that they went to the observatory, she asked that they inquire about the whereabouts of four templars she had sent to the scholars therein to gain information about the recent increased spate of volcanic and seismic activity.

A Horned Friend and a Large Friend

The pair were most interested in the Gate of Illumination, but since it looked like it would take them a full day to reach the shrine, they decided to explore Xotol on the way and gather more information about the unfolding situation. When they reached Xotol, they found many of the businesses there closed; the townsfolk were instead pitching in to repair the town's stone walls and other damage caused by the earthquakes. They also noticed that the residents of the town seemed to be of a different ethnicity than the priests they had encountered earlier, a fact that would become important later on.

Brother Albany and Horatio booked rooms at the Jolly Parrot, the only inn still open in town. The only other guest, a tiefling Vistana named Ollin, bought them drinks, so they sat down in the common room to enjoy his company and generosity. Ollin proved to be a font of information about Telepec. As a Vistana wanderer, he had made it his business to collect folk tales and local history.

Prompted by speculation that something monstrous was behind the volcanic activity, Ollin told them that in the days before the Church of Ezra's missionaries had arrived in Telepec, the native population had worshipped the "gods who lived in the volcanos," and had used offerings not unlike the ones they had seen in the priests' wagon earlier to placate their gods. As is often the case, the Ezra-ites had appropriated the ancient shrines and re-dedicated them to their goddess, which the pair began to suspect was behind the awakening volcanoes and the incursions of the snake-like, fiery monsters.

Ollin practically invited himself along on the rest of their journey; he was eager to add more lore to his store of knowledge about Telepec. The group set out in the morning for the Gate of Illumination. On the way, they encountered another overturned wagon surrounded by corpses, but this time the wagon had been stripped of offerings. Once healed, the sole survivor told them that fire-wreathed snake creatures had made off with the goods.

The group also encountered a red-bearded giant who forcefully warned them to turn back from "the maw of doom." However, by expressing an interest in saving their fellow humanoids from the coming apocalypse, they managed to get the giant, who introduced himself as Copal, on their side! To speed their haste in reaching the Gate of Illumination, Copal scooped them up, set them on his shoulder, and make quick strides to the shrine.

Izel, Lord of the Inferno

The Gate of Illumination proved to be an ancient shrine built into the base of a clearly active volcano. A red light pulsed from within--the interior walls of the shrine were laced with magical veins that looked like molten magma. A red haze hung in the air; the interior was hot, but not as hot as a building connected to a volcano ought to be. Of course, as a giant, Copal was too large to enter with them, so he waited for them outside.

The interior of the shrine confirmed their suspicious: the placement of statues of Ezra in front of murals depicting lizard-like volcano gods made it obvious that the Gate of Illumination was formerly a "pagan" shrine devoted to the creatures living within the volcanoes and that it had been appropriated by the Church of Ezra to aid their missionary efforts.

Exploring further, they found a trio of statues--two of which were holding urns. When the third urn was found and replaced, a miraculous thing happened: a red, peppery liquid appeared in the central urn. The trio took a chance and quaffed it; a little experimentation revealed that it had made them resistant to fire and heat. They also found a wounded snakeman and healed him.

They found themselves on a rocky "shore" that terminated in a lake of lava further in the shrine. They also found the four missing templars manacled to the wall, presumably left as sacrifices for whatever was moving beneath the flow of the lava. Brother Albany freed the templars and sent them outside to shelter with the giant. The group then watched in horror as a massive, lizard-like being of immense size and power pulled itself from the lava and stood erect on the rocky causeway. The creature was covered in black scales, but blindingly bright light began to pour from the seems between them.

The trio engaged the ancient "god" in combat, but it proved to be a worthy adversary. It belched gouts of super-heated, liquidized rock that both pummeled and burned them. Ollin was killed outright by the pyroclasm. Although Horatio and Brother Albany managed to wound the creature greatly, it beat Brother Albany into unconsciousness and Horatio also found himself near death. Before the monster could attack again, Horatio pulled Brother Albany to safety and exited the shrine. The "god of volcano" mockingly laughed as the pair retreated from its lair.

Outside, the pair healed themselves as best they could and hatched a plan. Although Copal was too big to enter the shrine through the door, they figured that he could climb the volcano, dive down into its heart, and make his way to the lake of lava that the volcano-god had emerged from. Brother Albany and Horatio again entered the creature's chamber to engage the monster while Copal got into position. The plan worked; Horatio and Brother Albany further wounded the creature--and then Copal emerged from the lava to deal the creature two massive blows with his maul. With the monster knocked down, Brother Albany finished it off.

With the death of the "god," Brother Albany and Horatio were fairly confident that the island's volcanoes would now resume dormancy, but they returned to town and stayed long enough to make sure. When no more earthquakes rocked the area, they were assured that they had done their duty and saved the people of Telepec. Before leaving, they suggested that the Ezra-ites build their own churches instead of repurposing older shrines--they believed that this is what had awoken one of the "ancient gods" of the isle. Also, they requested that all the offerings that were going to be brought to various shrines be given to Copal instead.