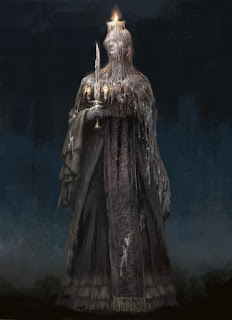 The candlemen are the degenerate descendants of engineers who were imprisoned deep below the earth in disused train tunnels. They are supplied food and candles from a mysterious benefactor (or jailer?) above. The candlemen keep thousands of candles burning at all times within their lair; indeed, the lair itself is coated with lairs of cooled, lumpen wax. The constant exposure to intense candlelight has rendered the candlemen blind, and the light within their lairs makes it difficult for non-candlemen to see as well. While their blindness renders them relatively harmless on an individual level, they tend to att‚ack in great swarms of broken-bodied madness.

I posted the above on this blog about two years ago. The "candlemen" were inspired by a particularly vivid chapter of Jay Lake's novel Mainspring. Somehow, Lake found the post and linked to it on his blog; he really seemed to get a kick out of how I adapted his idea for a game. I definitely got a kick out of him enjoying my post.

Jay Lake died later in 2014. I didn't know him, never met him, but it still felt like a loss. Of course, the best way to celebrate the life of an author is to read their works, so I'm making a point of delving into Green and Trial of Flowers this year, at the very least.