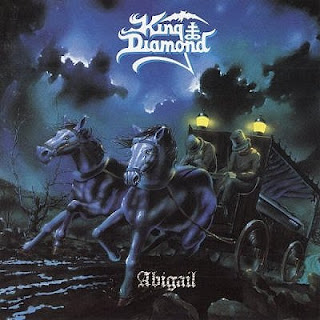 A Thing I Want to Exist: A Curse of Strahd-themed album by King Diamond.

Anyway, both Trey Causey and Jez Gordon pointed me in the direction of this cool Unearthed Arcana article about Gothic Heroes in 5e.

Here's an interesting post about turning Curse of Strahd into a one-shot adventure.

Kreg Mosier has a pretty great idea/madness-dream about Ravenloft-as-Southern Gothic:

1) Col. Strahd and his genteel mansion Raven's Loft.
2) An obviously vampiric Clark Gable-ish looking guy wearing an old Confederate uniform, brooding like a m.f.
3) "The War" was over, but "the light never came back", as some old Hoodoo priestess woman said, which were the only spoken words in the dream.
4) Barovia, Georgia basically...

Battlefield fog hung everywhere, and surrounding the estate outside was a forest that looked like something from prehistory...

Somebody run that.
Posted by Jack Guignol at 12:01 AM