A Tale of Two Fraudulent Spiritualists 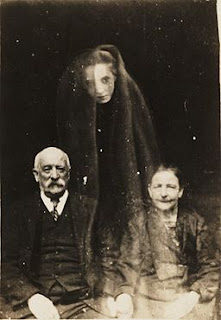 No Krevborna play report this week due to scheduling issues and technological failures. Instead, here's a play report from many years ago that I've been thinking about because it has some elements I want to incorporate into a future Krevborna campaign.

Only two players could make it to the game: perfect time to do a one-shot. We rolled up a couple new characters, and played to see what would happen.

I had them roll to see what horrible thing their characters' did before they became "adventurers." Both players rolled the same result, which indicated that both characters were charlatans. Their background: "You once worked as an exorcist; however, you had no especial skill or ability to banish demonic presences. In fact, while most of your cases involved people who were mentally disturbed, your last involved a young woman who slew her family while possessed by a particularly vicious devil—you were powerless to stop her. If your secret is ever found out you will be hounded as a fraud and perhaps confronted by church officials."

As a group, we decided that both characters were failed "spiritualists." The two characters (one fighter, one rogue) worked as a team of exorcists, even though both were complete frauds.

Of course, the job these two former charlatans got sent on related to the family they ripped off and exploited: they were to infiltrate the house where they failed to exorcise an entity from the youngest daughter of the family and retrieve a rare book that the family had stolen from an occult bookshop.

What these two low-lifes don’t know is that after the events of the failed exorcism, the family took the attitude of "If you can’t beat ’em, join ’em" and began to do the bidding of the presence inhabiting their daughter's body. They've had their agents steal the grimoire because the thing wants to open a gate to bring the rest of his foul cohort into the world.

Things...went badly. Botched plans, bad rolls, and chance encounters within the house led to a moment where one character (the fighter) was suspended above a pit of acidic ooze and was holding on to the thief's hand for dear life...and then he failed his roll to climb back up from the trap he'd sprung. The thief watched in horror as his friend and fellow cheat was dissolved. Unfortunately, the fighter’s death screams brought the rest of the family/cult running. The remaining character now surrounded by a circle of knife-wielding cultists, we closed the curtains on this sad scene.

Total party kill. The players loved it.
Posted by Jack Guignol at 12:01 AM