Under the Demon Sun 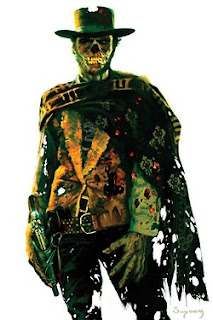 The way to Golgotha from Scarabae was long and hard; it left dust in their mouths and grit between their teeth. All they wanted was a drink to wash it all back down, but no such luck, partner. Outside town they were greeted by the sight of a group of men frantically digging graves with spade and shovel. Suspecting them to be waylayers or worse, the duo questioned the men closely.

Apparently the dead men to be buried hastily were discovered in the grip of rigor mortis; the working supposition was that they were loggers from a nearby camp. Before they were tossed down six feet into the waiting earth, Erin Landry got off her horse and examined the bodies. Erin had been a nurse in the Kobold Wars; some say she knew more about the frail mortal shell than most doctors. To her eyes, the corpses appeared to be badly bruised, and they evidenced puncture wounds not caused by blade or bullet. The wounds also oozed a thick green fluid that wasn’t blood.

Leaving the gravediggers to their task, the pair quickly located a saloon with the inauspicious name "The Forty Widows." About to kick back their second bourbon each, Erin and Saul had front row seats for a gruesome display: another customer pushed back his chair from his table, doubled over, and began spouting blood like a sanguinary fountain. His back erupted in a rather unappetizing shower of gore as two tendrils sprouted from his convulsing
body. 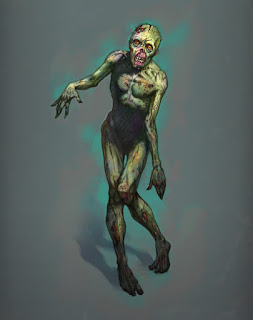 The scant few other patrons panic, of course, and stampede for the doors–but not before the writhing, tentacled man picks off a few of them. Saul sighs, slaps leather, and lets his two six-guns sing their songs of death and destruction. Ever more cautious, Erin unslings her rifle, keeps a wide circle of distance between herself and the thing that used to be a man, taking shots calculated to put it down hard.

If that wasn’t enough of a spit in the eye, in come crashing a posse of shambling, dead-eyed fucks drooling a viscous green mess all over themselves. Hell’s bells, they’re the loggers Saul and Erin saw being buried outside of town.

The monstrosity and his shambling pals get a few licks in on them, but at last the gunfire puts paid to this high weirdness. The shambling men lie inert, and the tendril-sporting fella crashes to the sawdust dead. It took more bullets than any living thing ought to.

The barman reappears from cowering behind the bar. A brief conversation discloses that the man was also a logger from the nearby camp. This sounds like something that the town fathers might pay to have looked into. Time for a conversation with whatever passes as a mayor in Golgotha about the possibility of a reward.

Tomorrow they ride for the logging camp.

Before violence between our duo and these gristle-faced loggers even has a chance to rear its ugly, misshapen head, a third party introduces itself to the situation: the loggers from the camp return, but not in their natural states. Like the loggers who came crashing into the saloon yesterday, these men and women have been rendered dead-eyed and shambling. As they emerge from the treeline, they moan and stumble toward their camp, each drooling a thick, green mucus that fills the air with a strange arboreal smell.

Accompanying the loggers is a black bear whose fur erupts in enormous briars and thorns. Someone has strapped metal plates to the bear as a kind of makeshift armor. 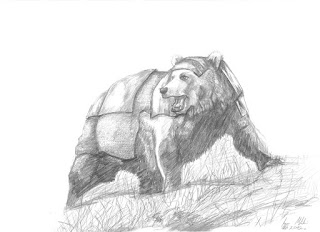 Hands up, who wants to die? The loggers from the other camp cut and run, like a bunch of gizzard-licking cowards. Not Saul and Erin, though. Guns out, blazing, filling the air with that fire-and-brimstone ricochet of bullets. Erin and Saul play cat-and-mouse with the shamblers, using tents and hastily-erected lean-to buildings for cover as they lure the drooling beasts out into the open to be shot down. There’s no getting around the bear, though; it charges Saul, knocking him down and sending his six-shooters flying from his grasp. As its claws come down, a blazing red shield springs up and takes the worst of the bear’s assault.

It’s a good thing he offered unholy prayers to the red-handed Hanged Man that morning, else the bear would have torn him open from stem to stern. Saul hacks at the beast with a tomahawk he "liberated" from a tribe of serpent-worshiping savages, and the ever-mauling bear makes a break for it and begins to run through the woods. Erin wings it with her rifle, but doesn’t drop it. Nevertheless, now they’ve got a convenient trail of blood to follow if they so choose. 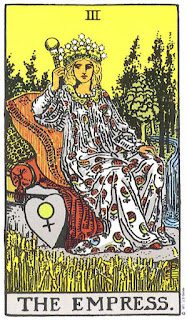 With that monstrous, thorn-bedecked bear run off, Erin and Saul could sit a spell and tend to their own wounds (which are, at this point, considerable). But the bear is their best lead in finding out what flavor of hell has broken loose out here among the logging camps, so maybe they should follow it now before the trail goes cold. Then again, this might be a good time to head back to Golgotha and renegotiate with the town fathers for taking care of this spate of trouble.

Much as it pains him to admit it, Saul grudgingly knows that he’s in no shape to go after the bear. Erin has a solution; she rustles around in her saddlebag until she finds a fresh bottle of whiskey, sits down with it in the lotus posture, closes her eyes and begins to chant. Now, Erin Landry is what you’d call a "plain woman." You wouldn’t turn your eyes from her in disgust, nor would you ever spare a second to think her beautiful. But as she chants, Saul stares in wonder as face changes–becoming bright, alluring, and wicked. Saul feels a sick feeling awaken in his gut as he looks at her, for the low words she repeats are words given to her by the Empress.

When the chant ends, Erin is road-worn again, no longer comely and fair and serpentine. She offers the bottle of whiskey to Saul; the slug he takes from the bottle burns going down, but it also stitches his wounds together from the inside. They pass the bottle back and forth, and are restored. 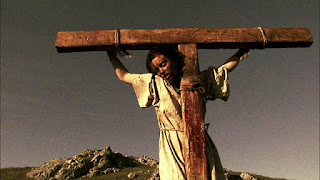 Time to see about that bear.

The trail is easy enough to follow, up to a point. Then the way branches off in two directions with no clear indication where the bear went. Misdirection is afoot. Saul and Erin choose the right-hand path, which carries on for a bit before opening out into a small clearing. At the center of the clearing is a large wooden cross; the lumber used in its construction looks an awful lot like the rough wooden plants used back at the logging camp. Nailed to the cross is the twisted and broken body of a logger.

"Aww, hell no," Saul growls. He unholsters his pistols and puts lead into the body on the cross. His intuition served him well, as the woman’s eyes flutter open and her face twists into a grin as she rips herself free from her own crucifixion. The thing eats dirt before it can even reach Erin and Saul.

Pushing on, then. Deeper into the woods they go, until they arrive at another, larger clearing. At this center of this one is an enormous, warped tree that heaves and shakes as though breathing. Surrounding it are the men from the second logging camp who ran off during the fight with the transformed woodsmen. They glare at Saul and Erin.

"You shouldn’t have come here," one of them mutters. 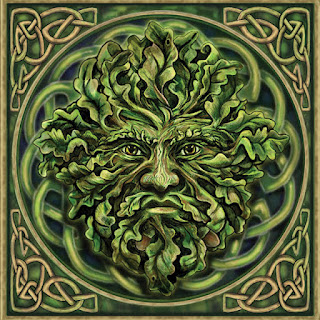 Something like a man, but green of skin with gnarled branches for arms, acorns for teeth, and leaves for hair emerges from the pulsating tree. The bear emerges behind him, its wounds bandaged with greenery. Guns unslung, of course. "Let’s parlay, if you’re able," says Erin.

The Green Man gestures for the loggers to hang back a pace. In a voice ancient and deep, he explains that Saul and Erin now stand at the Sacred Heart of the Woods, and that the loggers from Golgotha had begun to cut too far into forest for their lumber. Only these loggers, he gestures to the men around him, have offered the proper blood sacrifice to maintain the balance. Perhaps the town fathers of Golgotha would be willing to pay a blood tithe to the Woods so that all could remain in agreement, and no more violence or transformation of its men would be necessary? Such a bargain would require a lot of blood...

This is a dark bargain to strike, but in their heart of hearts both Erin and Saul know that it is one that the town will readily assent to. Part of them would like to just open fire and put an end to this here and now, to strike a blow for progress against this demon-twisted aspect of nature. But this isn’t that kind of world anymore; continued existence is paid for in shed innocence. And so they deal; the Green Man agrees to a truce, Saul and Erin will take his offer to the town and return in the morning with an answer. Blood will water the soil and strike the balance between the natural world and man’s coexistence with it once more. So it goes under the demon sun.
Posted by Jack Guignol at 6:57 AM