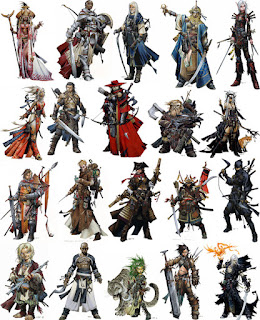 I’ve seen a lot of old-school gamers complain that making a Pathfinder or 3e D&D or 4e D&D or 5e D&D character is too hard or requires too much work compared to old-school editions. They’d rather not have to make all those decisions about feats, skills, powers, etc. or even buy in to the system mastery needed to know what the good choices are; it would be better if you just got set things each level like in the earlier editions.


I can sympathize with that, to a degree. I don’t want to read 20 pages of feats either to pick out which one my 1st level character gets either. But then again, this is 2016 and the internet has already done the heavy lifting for you.

Let me show you how.

As you can see, if you do a search for just about any Pathfinder or 3e or 4e or 5e character class + "builds" or "guide" you will get a highly-detailed guide on how to make such a character. Just treat the "build" as a class where what you get is spelled out in advance each level. When you hit level 2, don’t worry about reading through all the feats to pick a good one–just go with the one spelled-out in the build document. The people who write those treat it like it’s a calling, so you aren’t likely to get burned.

Letting the internet make all the choices for you takes all the work out of it; now you can get on to the part you presumably like: killing goblins and collecting loot. Or maybe role-playing a character. Whatever you’re into.

My point is this: Pathfinder or 3e or 4e or 5e might not be your favorite editions, hell, you might even hate them, but if you get a chance to play with some cool people don’t let "It will be a drag to make a character" or "This edition isn’t my favorite one" be the things that stop you. That goes double for "Well, I only like playing D&D."