Necro-Cavaliers of the Astral Galaxy 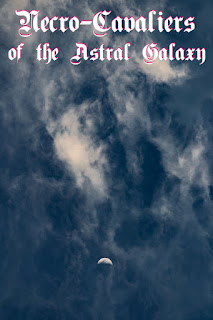 Happy Halloween, everyone! I come offering a treat.

Necro-Cavaliers of the Astral Galaxy is a tabletop rpg hack of John Harper's Lasers & Feelings that answers the question "What would Warhammer 40k be like if all the grimdark was replaced with haute couture?" There's also a ton of influence from Tamsyn Muir's The Locked Tomb novels in it. I've already posted an actual play report from my first time running it here.

You can grab it in either a screen-ready version or a version meant to be printed as a twelve-page zine here at my Itch.io page. Here's the pitch for what the game is about:

The God Empress Requests Your Assistance

The Astral Galaxy has been ruled by the God Empress, She Who Sits Resplendent on the Opalescent Throne, for longer than recorded history remembers—great fat spans of millennia, at least.

You were born into one of the seven hereditary noble houses that form the God Empress’s court. As a member of the galactic aristocracy, yours has been a life of leisure and privilege. You are a fop, a dandy, a rake, a swell, and a toff. You are accustomed to being garbed in the height of fashion, drinking the rarest of libations, attending the most lavish soirees, and experiencing pleasures of dubious morality, virtue, and legality. You are a pampered, preening child born of wealth and luxury.

However, you were trained to be useful—should the need arise. You were not allowed to grow fallow. You were made to practice the arts of war and the arts of black magic. You were educated, tutored, and made skillful. You were honed, sharpened. You are a tool. You are a weapon.

You were raised as a necro-cavalier of your noble house. You reluctantly or begrudgingly underwent training as both necromancer and cavalier because your elite status comes with an obligation—a duty so sacred your family dare not shrink from it. The God Empress reserves the right to request that the noble houses of her court furnish her with their sons and daughters to serve whatever aims she sees fit. No one can deny the whims of the God Empress.

You have been called upon by the God Empress for a task that will, no doubt, put your life in jeopardy and test your fealty to your noble family and your beloved-slash-feared God Empress. As a necro-cavalier of the Astral Galaxy, you are honor bound to sally forth as the God Empress wills it.