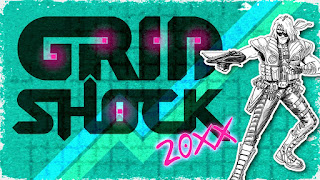 GRIDSHOCK 20XX, a "Superpowered Fist to the Face of Armageddon," is in the home stretch on Kickstarter. Here's the blurb from the Kickstarter page:

GRIDSHOCK 20XX is a tabletop roleplaying game setting: a superhero world where something went very wrong in 1986. Reality was warped, civilization collapsed, and the world as we knew it was turned upside down. Now the bad guys are in charge of what's left – but a new breed of superhumans called Vectors strive to restore freedom to their ravaged world. Like the heroes of the past, Vectors use their powers to address injustice directly, and with style: by punching it in the face, or blasting it with laser eyes. And with a totalitarian state called the Supremacy in control, there are a whole lot of things in need of punching and blasting.

I've played in a couple of Paul V's GRIDSHOCK adventures; if the Kickstarter page doesn't give you enough of a feel for what the setting is like, check this out or maybe this as well. You've got 48 hours left if you want in on it.