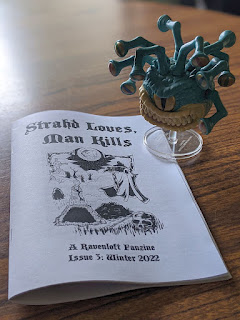 According to Goodreads, I read more in 2021 than in any other year that I've kept track of. Apparently spending the majority of your time indoors because there is a pandemic going on will give you a lot of book time, who knew?

My favorite books of the year: Catriona Ward's Rawblood, Andrew Kelly Stewart's We Shall Sing a Song Into the Deep, Caitlin Starling's Yellow Jessamine, Carmen Maria Machado's In the Dream House, and Tanith Lee's At the Court of the Crow. In general, it was a good year for novellas, but maybe that's just where my attention span was at in 2021.

I also caught up on or finished two lengthy manga series: Claymore and Black Butler.

If you want to hear more about my favorite stuff of 2021, check out the Best of the Year episode of Bad Books for Bad People.

Speaking of the podcast, we came out of our unplanned for hiatus and managed to get seven episodes out into the world despite months of dormancy. Our episode on Requiem Infernal already seems like a fan favorite.

On the publishing front, I published the first two issues of Strahd Loves, Man Kills and wrote five more issues for publication in 2022. The third issue just dropped, so if you haven't picked it up yet keep in mind that I've already sold more than half the print run. You can expect the zine to get a little bigger in 2022--I'm expanding it from 28 pages of content to 32. I also contributed to the second issue of KNOCK, The Book of Gaub, and another rpg project that should see the light in 2022.