Strahd Loves, Man Kills, my Ravenloft fanzine, is back with not one but TWO new issues! Check them out here at my Big Cartel page. 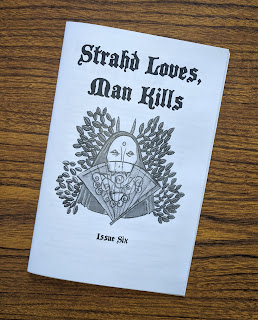 Issue Six has the following contents:

Wicked Wanderings expands on the idea of creating Vistani characters by reconsidering the specialties of several Vistani tribes from past editions of the Ravenloft setting.

Seeds of Evil details several adventure seeds you can use to craft scenarios set in Ravenloft.

Portraits of the Damned presents three nonplayer characters for use in your games: the Black Iron Widow, the Blood-Soaked Diva, and Ivahn Katavarg.

Cryptic Alliances adds the Corvidians, a folk religion that worships the Raven Queen, to the factions detailed in Van Richten’s Guide to Ravenloft.

Tragic Heroes focuses on metropolitan miscreants you might create as characters for games set in the Domains of Dread.

Random Ruin features tables for detailing the horrors haunting the city of Paridon in Zherisia.

Forbidden Tomes provides a bibliography of the Gothic horror genre for your edification and entertainment. 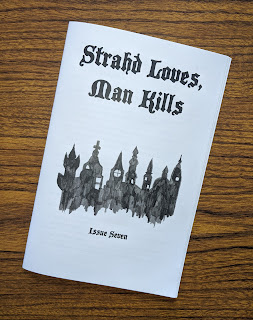 Issue Seven has the following contents:

Cryptic Alliances unveils the treachery and horrors of the Church of Holy Blood.

Portraits of the Damned introduces three troublesome priests vying for the hearts and souls of the Invidian people.

Seeds of Evil outlines several adventure seeds you can use to craft scenarios set in Ravenloft.

Forged in Shadow describes two magical weapons that might be found in Ravenloft.

Tragic Heroes suggests ways to create violent visionaries as characters in your games.

Random Ruin presents a table of art-related adventure seeds for use in the domain of Ghastria.

Forbidden Tomes provides a bibliography of the disaster horror, occult detective story, psychological horror, and slasher horror genres for your edification and entertainment.