Below is an NPC from my Ravenloft campaign. If you like this sort of thing, check out Strahd Loves, Man Kills #8, the pages of which are guaranteed to be haunted by the Blood-Soaked Diva! 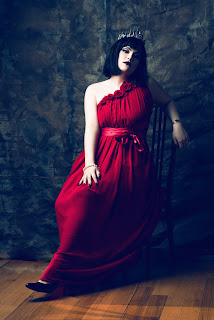 The Blood-Soaked Diva
Karmina Scarabasca was an elven opera star whose career was derailed by scandal and whose life was cut short by incurable consumption. After losing her position as a respected singer when she was exposed as the paramour of a married noblemen, Karmina found that the only venue that would have her was the Midnight Cabaret, a shabby music hall located on a particularly disreputable lane in Dementlieu.
Karmina’s health suffered amid the grime of the Midnight Cabaret; the flecks of blood that began to decorate her lace handkerchiefs when she coughed indicated that her days were numbered. Unable to endure her fall from grace or face a painful death from illness, Karmina took her own life by hanging herself from the rafters of the Midnight Cabaret. Embittered by her tragic end, Karmina’s spirit lingers within the music hall, attacking any performers who seem poised on the brink of greater success. Her true name is forgotten, but her legend lives on under the name “the Blood-Soaked Diva.” Performers at the Midnight Cabaret report spotting a spectral figure clad in an opera gown soaked through with blood; they fear hearing the sound of a ghostly aria—the telltale sign that the Blood-Soaked Diva has crept near.
Karmina Scarabasca’s Traits
Ideal. “I must sing, though my voice now brings death.”
Bond. “I cannot leave the confines of the Midnight Cabaret.”
Flaw. “I hate anyone living the life that should’ve been mine.”
Adventures with the Blood-Soaked Diva
The Blood-Soaked Diva is a banshee. Consider the following plots when featuring Karmina Scarabasca in your adventures:
• A fan wishes to be reunited with the singer who once stole his heart—even if she be among the undead.
• Karmina has set herself against a young starlet.
Posted by Jack Guignol at 10:37 PM