The Face in the Abyss 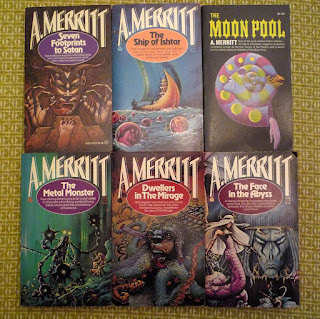 I recently bought these six novels by A. Merritt for a song; the crazy thing is that these printings are nearly as old as I am, yet all but one of them has remained unread. Somehow they've just been kicking around, yellow of page but otherwise in pristine condition.

I'm...going to do what ought to be done with them: I'm going to read them.

(I also picked up an edition that collects Merritt's other two novels in one book for fifty-eight cents. It's been good hunting lately.) 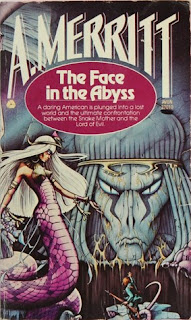 First up: The Face in the Abyss, A. Merritt
There is a particular kind of disappointment that happens when you read a "classic" of Golden Age pulp fantasy and it's a total train wreck that leaves you thinking that maybe these books were only considered classics because of the limited options available at the time.

This is not a book that will give you that feeling.

Instead, The Face in the Abyss is the platonic ideal of pulpiness: it's got a hidden city with ancient white people ruling over dusky natives (!!!), gladiator fights with dinosaurs, a snake woman with terrible magic-science weapons, a villain who strikes me as a mix between Sauron and Skeletor, an attractive and frequently-imperiled heroine, and a square-jawed hero who reminds himself that he went to the Harvard School of Mines (!!!) during a moment of self-doubt.

So, yeah, this is not particularly forward-thinking stuff, but it's a ripping yarn. Nevertheless, for this sort of novel it does hold forth some surprisingly deft meditations on cultural degeneration. The conclusion needs some pew-pew raygun and explosion sound effects playing in the ground for maximum enjoyment, but that's left to the reader to supply.
Posted by Jack Guignol at 12:03 AM