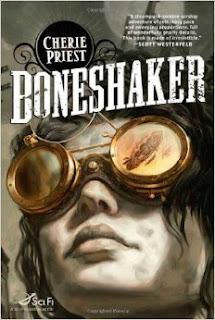 A lot of steampunk settings run shallow, but that is not the case with the post-apocalypse steampunk Seattle described in Cherie Priest’s Boneshaker. Priest’s re-imagined Seattle has been left desolate and dangerous by the "trial run" of Leviticus Blue’s Incredible Bone-Shaking Drill Engine–the "Boneshaker" in common parlance. The Boneshaker drilled under many buildings in the city (most notably the banks), which collapsed several structures. Worse yet, the drill released a toxic substance now known as Blight gas from deep within the earth; those who are exposed to too much Blight gas become rotters–that’s zombies, to you and me. In the aftermath of Blue’s experimental drill, Seattle was evacuated due to being overrun by rotters and Blight gas. Massive walls were erected to keep the gas and rotters contained (the gas is heavier than air), and the city was largely abandoned.


Nevertheless, that doesn’t mean that the city is uninhabited. Desperate and mad hold-outs still carve out an existence within the city walls. Doornails (as in, "Dead as a...") have created their own fortified enclaves, Chinese immigrants man massive air pumps to bring fresh air in from above the city’s walls, and scrappers search the refuse and rubble for items worthy of salvage.

The city isn’t as inaccessible as is generally assumed, either. Sky pirates can tether their airships above the walls to transport goods and people in or out of Seattle. Similarly, the tunnels that make up the water runoff system can be navigated to provide entrance to and escape from the city.

There is good reason to enter and leave the city, especially if you’re a ne’er-do-well of the criminal sort. Chemists have formulated a way to distill Blight gas into an addictive drug called lemon sap, so dealers rely on opportunist entrepreneurs to harvest the Blight gas from within the city’s walls and on rogue scientists to render the gas into its profitable form.

Of course, any sort of expedition into the city will be dangerous. The Blight gas that clings to the streets requires that any travelers don filtration masks and cover as much skin as possible (the gas is highly corrosive). The hordes of ravening rotters make stealthy movement a must. Additionally, the people who still live within Seattle are highly factionalized; straying into territory controlled by a group you don’t belong to is a recipe for an early grave.

However, as hardscrabble as Seattle is, efforts have been made to make it a more survivable place. The various inhabitants of the city have worked hard to create sealed-off areas that offer a haven of fresh air. These safe-zones are accessible by retractable ladders, platforms, and catwalks. (Rotters can climb, but not without difficulty.) Some of these safe harbors even contain a stock of refreshments for the weary traveler.

Furthermore, the city’s residents have heavily-fortified their regions against rotter incursions and against attacks from each other. Because occupying the upper stories of extant buildings risks exposure to the Blight gas, Seattle's survivors have build down into the earth, carving out subterranean kingdoms supplied with semi-fresh air.

Twisting tunnels and secret doors offer a veritable city-beneath-the-city to explore. And with the amount of experimental steam-tech left over from Leviticus Blue’s experiments, to say nothing of the new creations doled out by the sinister, masked Dr Minnericht, there is surely enough loot here to tempt an outsider into delving Seattle.

Now that's some good world-building.
Posted by Jack Guignol at 12:00 AM