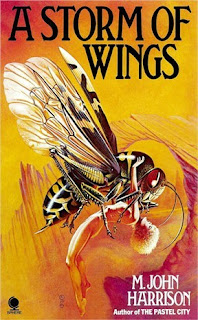 A Storm of Wings is an incredibly frustrating book because the ways in which the author tries too hard and doesn't try hard enough collude against the story. M. John Harrison tries far too hard to convince the reader that the setting of his novel is dream-like, hallucinatory, and weird. That's a fine world-building goal in itself, but when one of your primary ways of achieving a phantasmagorical setting is to describe things over and over with the words “indescribable” and “alien,” you're actively avoiding engaging with language to show the reader how strange your fictive world is—you're telling the reader how odd it is, which (as a writing technique) has very little impact on the reader's aesthetic response.

Harrison's other technique for expressing the strangeness of his setting is similarly flawed; he tends to jam incongruous words together in a way meant to be surprising, misdirecting, and novel, but these lexicographic pile-ups often over-reach and come off as lazy shorthand that would be better better replaced by concrete description.  Also, Harrison is overly-pleased that certain words live in his vocabulary; “gamboge” and “hieratic” occur frequently within the text as pale markers of the author's self-assumed cleverness. The rarity of oft-unused words can't carry descriptive weight alone.

The saddest victim of Harrison's excesses and deficiencies is the pace of the novel's plot. Underneath all the verbiage and attempts at disorienting imagery lies a simple narrative core: the world is being invaded; unlikely heroes must assemble; the nature of the invaders needs to be uncovered; the invaders need to be stop and the world thus saved. This is an archetypal, but still enjoyable, narrative structure. But it seems that Harrison is embarrassed by how typical a story he is telling because he takes every opportunity to avoid telling it.

Alternately, one may suppose that he's embarrassed at writing in the fantasy genre.

My copy of the book is about one-hundred and forty pages long; the first ninety pages are spent gathering the characters to their quest and illustrating their disaffection and alienation by the above mentioned means. The actual plot only really kicks in during the last forty pages of the book, and proceeds almost perfunctorily as a chore that has been put off but now must finally be done.

When the plot does lurch forward, it's clumsy on its feet. Despite spouting some of the worst attempts at nonsensical “alien” dialog ever committed to paper, the ghost of a spacefarer suddenly becomes lucid and drops a huge chunk of plot revelation because the author has been neglecting to seed bits of actual story throughout the narrative. Our ghost here is constantly farting and belching; this important because...? Ah yes, bodily functions signal weirdness or some such.

The tragedy of Storm of Wings is that Harrison is clearly capable of so much more. The Pastel City managed to tell a story directly while still presenting a unique world and making a case for the author's aesthetic taste. Although still excessive, though to a lesser extent, In Viriconium has a sort of lunatic charm. A Storm of Wings itself is littered with sparkling lines that are beautiful, true, and deserving of a better novel to bejewel. “We value our suffering. It is intrinsic, purgative, and it enables us to perceive the universe directly,” Harrison writes powerfully. Would that the rest of the book was built from this sense of direct perception, and not reliant on gimmicks of language and a dialectic of pretense and indolence.
Posted by Jack Guignol at 11:42 PM