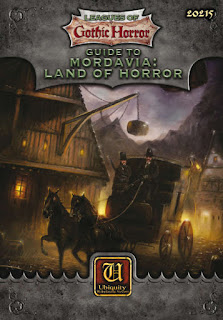 Guide to Mordavia: Land of Horror is a short setting supplement for the Leagues of Gothic Horror roleplaying game. Mordavia is essentially a Gothic Ruritania. If you're unfamiliar with the term, Ruritania was a fictional central European nation in the novels of Anthony Hope; in its more modern usage, a "Ruritania" is any invented minor European nation--generally a backwater free from the constraints of real-world history. In this case, Mordavia is a small isolated nation that occupies the land that is in our world Maramures county in Romania. Of course, since this is a supplement for the Leagues of Gothic Horror rpg, this particular Ruritania possesses a Gothic atmosphere and a haunted history.

Unfortunately, the deployment of that haunted history runs up against one of my pet peeves in setting supplements. Guide to Mordavia gives too much history that isn't immediately applicable to the game's current moment; the historical overview starts with prehistory and works its way into the modern era. Even though the historical entries are mercifully short, it still feels like too much. The overall gist is fairly simple: the land of Mordavia has always been connected to worship of an eldritch worm-serpent-dragon thing; that worship has often taken the form of degenerate cult activity; the cult has been purged multiple times, but it always comes back after being driven underground. 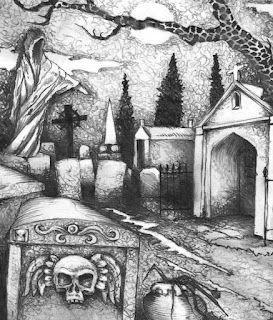 The second chapter further forestalls getting to the good stuff: "Before we get to the supernatural, we must first take a look at the mundane." The chapter covers how one might get to Mordavia by airship or train, the local geography, the climate, flora and fauna, currency (though it tells you in no less than two places to basically hand-wave it anyway), ethnic demographics, language, accommodations, fashion, communications, cuisine, etc. I'm sure the thought here was that having this information all in one place would be helpful to Game Masters; the problem is that if you already have an image in your head about what an Eastern European Gothic backwater is like you already know all the information this chapter provides. I'm fairly sure that anyone could come up with getting a carriage, riding a horse, or walking as your options for getting place to place, for example.

The third section of Guide to Mordavia details specific locations and their inhabitants. This chapter is the meat of the supplement, as it gives the GM the raw material that is actually useful for creating adventures in the setting. However, in many instances the material is perhaps a little too raw; the locations and the haunted residents within often feel both a tad generic and like they hint at more interesting possibilities that are never fully spelled out. For example, one location is an observatory inhabited by an Austrian astrologer. His nocturnal lifestyle has aroused suspicious that he is a vampire, and he sends his hunchbacked assistant to request strange scientific equipment. Good enough start, if a little cliche, but what is he up to? 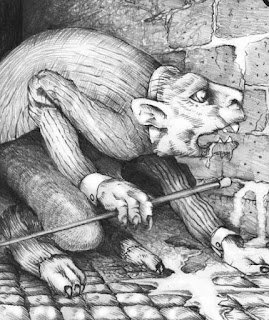 These questions are only answered in the last section of the book, which adds further detail about the NPCs living in the locations described in the previous chapter. Our Austrian astrologer, for example, turns out to have made contact with Azathoth. The way information is spread out is slightly inconvenient; I would prefer to have the NPCs more cleanly delineating when they're first described so all that information is in one place.

However, although I wish there was more guidance on how to use the setting, what's going on there, and that there were some suggested adventure seeds, the final chapter does at least tie things together. The two cults described at the end of this chapter, one devoted to the Great Wolf and another who venerate the previously mentioned worm-serpent-dragon, bring things full circle. Additionally, I like that the section on the worm cult gives you options for presenting the worm as a Lovecraftian monstrosity or an actual dragon.

Overall, I think Guide to Mordavia is a fairly average setting book. Although it is a short book, it does feel like it wastes a bit of space on mundane detail, and when it does get down to the more interesting bits it could have been pushed a little farther. Also, the book could have used another editing pass. For example, "Those who prefer waltzes and other more gentile dances can do little but hope for an invite to a ball at the duke’s castle" is humorous, even if the word they were looking for was genteel. At least they didn't reference genital dances, I suppose.