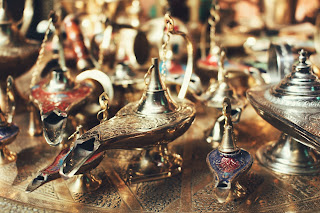 I've been running the adventures in Candlekeep Mysteries lightly reskinned for my Krevborna setting. The characters are all employed as members of Creedhall University Library's "Special Collections Department," aka adventurers. This is a recap of what happened in "Zikran's Zephyrean Tome." Fair warning: spoilers lurk below.

Elsabeth, Rufus, and Gnargar were called into a meeting with their superior, Horatio Lupa. Lupa had a mission for them that was part library business, part reward for their efficiency in past missions. Horatio presented them with a book bound between two slabs of white marble. When opened, the book caused the room to fill with sweet-smelling smoke; out of the smoke stepped a djinni, who introduced himself as Gazre-Azam.

Gazre-Azam explained that long ago he had been summoned by a wizard named Zikran, who bound him to the book. Gazre-Azam desired his freedom--and suggested that the group might help him explore Zikran's last known hideout for clues as to how that might be effected. Setting Gazre-Azam free from the book would also benefit the library, as the book would regain missing sections of writing as soon as the djinni was released from it. To sweeten the deal, Gazre-Azam offered to grant the party a wish should they successfully free him from the tome in which he was imprisoned.

Following Gazre-Azam's directions to Zikran's lair led the group to the shores of Loch Riven. They quickly located the flooded cave that was Zikran's last known residence; a strange pillar of oily black rock was standing sentinel beside the cave's entrance. Wading inside, they discovered two corpses bobbing and floating beneath the waterline; they had been weighed down with chains. The water got deeper the farther they ventured into the cave. Gnargar focused his ki and ran across the water's surface to reach a dry plateau that had been hewn from the rock; as he ran across the water, he noticed that the bottom of the chamber was scratched, as if it had been scarred by giant claws.

Further exploration uncovered a bookshelf filled with volumes about nautical matters, which the group loaded into their packs to take back to Creedhall University Library. However, in the next chamber they discovered the books' owner: a dragon with scales the color of tarnished brass. The dragon questioned the group about their intentions and demanded that they return his books. Elsabeth did one better: she offered to organize and index the dragon's collection of tomes! A deal was struck: the librarians would sort the dragon's books and in return he would allow them to search the remains of Zikran's laboratory.

It was clear from Zikran's laboratory, and the dragon having taken up residence therein, that he no longer laired in the cave system. A diary revealed that Zikran feared an intrusion from Laffa, a fellow wizard, and was looking to relocate his operation. A stray map with a circled location among the mountains suggested Zikran's new hideout. Rufus found a scrap of paper detailing the construction of what looked to be an elemental-powered cannon; reading it gave him a good idea of how the device could be operated.

Following the map led the party to a ruined fortress that had been build into a cleft in the mountains. The fortress's enormous door and windows suggested that it had been built by beings far larger than human-sized creatures. When the door was breached, the group saw two mournful giant ghosts pacing the floor of the grand hall, weeping soundlessly. Gnargar attempted to sneak past them to exam a collection of giant scrolls kept in a glass display case; however, opening the case alerted the spectral giants to the group's presence.

The giants struck mighty blows with their ghostly mauls; the battle was hard fought and the party sustained substantial wounds fighting off the giant specters. Exploration of the rest of the ruins revealed many more ghostly giants, each in an attitude of mourning or melancholia, but after their first skirmish with these spirits the group felt it was best to studiously avoid interacting with them or drawing their attention.

On the stairs leading down into the keep's dungeons, the group encountered a unexplained stream of water that seemed to be descending behind them. Pressing past it revealed the new laboratory of their quarry: they had located Zikran, who turned out to be an obese genasi wearing an assortment of fish bones and sea shells. He was also wielding a wand that gave him control over an elemental cannon, which blasted the group with a stream of hoary ice and frost!

The strange water that was dripping from the ceiling coalesced into a water elemental and two ice mephits--the party was confronted by a veritable rogue's gallery of elemental foes. Rufus ran to the elemental cannon. Because he had found the diagram describing its construction earlier, he understood how to fire it--and fire it he did, turning it on its creator! Grangar engaged the water elemental, using his seering arc strike to sheer off portions of its watery body by turning it into steam with his flaming fists. Poor Zikran, every spell he attempted to cast was foiled by Elsabeth's counter-magic; the paladin would allow no extraplanar influences to turn the tide against her compatriots.

When Zikran fell, the marble cover of Gazre-Azam's prison shattered, releasing the djinni from captivity. He gave the group a slow clap to celebrate their victory and his freedom. Of course, he now owed them a wish. The group wished...for control over the Old Tower, which is an ancient spacefaring vessel, that they had explored on a previous adventure. The wish was granted. As a bonus, they now had an elemental cannon of their own to play with.