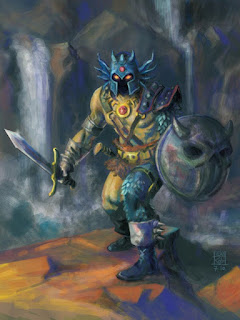 I don't claim to have any sort of meaningful answer to the issues to representation, colonialism, and racial essentialism in Dungeons & Dragons. If you want a nuanced take on those topics, you should read Allandaros's Productive Scab-Picking: On Oppressive Themes in Gaming. Seriously, go read it right now; there's not going to be a better blog post than that this year.

If you stuck around, all you're going to get for your troubles is a really stupid idea. If you're concerned that orcs, goblins, and the like might map to real-world ethnic and racial subjectivities...just replace those creatures with wardukes.

As far as I'm aware, no one has ever claimed that Warduke is poor representation, so it's probably okay for your fictional characters to kill droves of them in a game. If you're worried about the indulgence of violence against individuals possessing free will, I suppose you could always go the Star Wars route and have wardukes all be clones of the original Warduke.