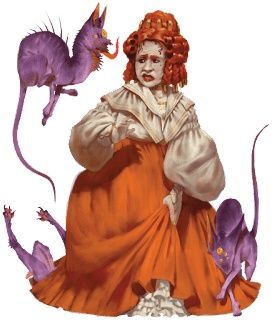 There have been many people covering the rules content in Van Richten's Guide, such as the new lineages, new subclasses, dark gifts, and other widgets, but I want to talk about the domains as a long-time fan of Ravenloft. How do they stack up, what alterations have been made, and how gameable does this iteration of the Domains of Dread feel? I've covered Barovia, Bluetspur, and Borca here, the Carnival and Darkon here, and Dementlieu and Falkovnia here. Today we're talking talking about Har'Akir, Hazlan, and I'Cath. 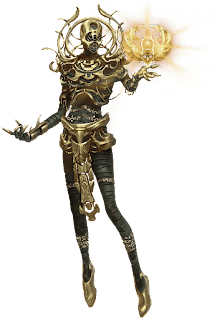 Har'Akir was conceived of as Ravenloft's Egyptian analog, and so it remains. It's got mummies, pyramids, vast dangerous deserts, etc. There are a couple of nice twists, such as animal-headed mummy-priests in service to the domain's Darklord and the fact that all of its labyrinthian dungeons are connected beneath the waves of sand. Har'Akir has never really sparked my imagination in its past versions, and the new version doesn't really light my world on fire either.  It's fine! It's perfectly functional! It just doesn't call to me. You could do your The Mummy adventures here, or do something a little Dark Sun-esque but with a more Egyptian flavor.

Hazlan is "wizard hell," a domain ruled by selfish arcanists whose experiments have created an unstable land of wild magic. Hazlan also has a bit of a "Big Brother is watching" feel; Hazlik, the domain's wizardly Darklord, can see through magical sigils that are inscribed everywhere throughout the realm. Of course, as "wizard hell," you can basically use that as an excuse to use any monster you want and call it an escaped magical experiment.

Hazlan functions as an amplification of anxieties about environmental degradation due to industrialization, only here the environmental impacts are given a magical gloss, such as toxic marshes polluted by alchemy, an area where the land is simply disintegrating, and Dune-esque sites where purple worms gather. I do wonder if there is a bit too much conceptual overlap with Darkon, but the environmental disaster aspect does at least help it stand out. If you really pushed that angle, you might even up in Jeff VanderMeer territory. 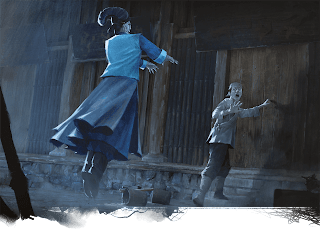 In the 2e-era, I'Cath was a domain suitable for exactly one minor adventure. (And it wasn't even a good adventure.) Once that adventure was complete, there was really nothing else there to interact with. The 5e version of I'Cath is...quite high concept. On the surface, it's "Gothic China'; the real premise is that by day I'Cath is a delipidated realm of misery, but most of its residents have fallen prey to an enchanted sleep. While they slumber, they exist in a different version of the setting in which they labor to create the perfect city in their dreams. It's all a bit Dark City, but I've read this section several times and to be honest it's still a little unclear to me how this works and what kind of adventures this domain is meant to inspire.

One thing that struck me about I'Cath is that it feels even more referential to ethnic stereotypes than the past version, which is strange for product coming out of WotC's zeitgeist of sensitivity and the rehabilitation of old tropes. Perhaps I'm reading too much into this, but Tsien Chiang, the Darklord of I'Cath, is presented as a mother who wants her daughters to love her, wants everyone around her to be perfect, and is also doomed never to be satisfied--which feels like a magnification of the "tiger mom" stereotype. The "escape the horrific real world by venturing into the phantasmagoria of dreams" angle in I'Cath feels like it leans on the "Chinese opium den" trope, although it sidesteps any drug references and replaces opium with the ringing of an enchanted bell. However, since that bell was created from the body of a dragon, it's still a version of "chasing the dragon" in an almost literalized sense.