Van Richten's Guide to Ravenloft: The Carnival and Darkon 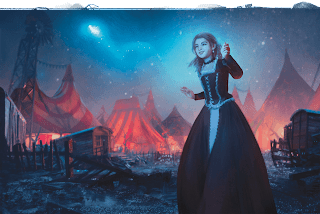 There have been many people covering the rules content in Van Richten's Guide, such as the new lineages, new subclasses, dark gifts, and other widgets, but I want to talk about the domains as a long-time fan of Ravenloft. How do they stack up, what alterations have been made, and how gameable does this iteration of the Domains of Dread feel? I've covered Barovia, Bluetspur, and Borca here. Today we're looking at the Carnival and Darkon.

The Carnival differs from most Domains of Dread in that it is not a stationary place; it is a sinister circus that can arrive anywhere in Ravenloft. The performers who travel as part of the Carnival are not generally ill-intentioned, but malignancy is always nearby in the form of fey merchants who arrive to sell their strange wares (and get up to god knows what else) alongside the Carnival. These fey merchants remind me a bit of Christina Rossetti's Goblin Market. Since the Carnival can travel throughout the domains, it's a nifty way for your characters to get from place to place: just hitch a ride by running away with the circus.

Overall, I love the presentation of the Carnival. It reminds me of the best parts of Carnivale and my own experiences on many a midway. However, I do find the Carnival's backstory, particularly regarding its proprietor Isolde, a bit convoluted and overly long. I also think that the Carnival write-up is confused about how the rest of the book says Darklords in Ravenloft work. You see, Darklords are trapped in their domains where they are tormented by their prior sins. Isolde is tormented by her role in the Carnival because it causes her to feel torn between conflicting loyalties and a desire for vengeance. This would work fine, except Isolde isn't the Darklord of the Carnival!

Isolde's sentient sword Nepenthe is the actual Darklord, but the sword has no real backstory and doesn't seem to be tormented by the domain at all. Additionally, the sword can at least temporarily leave the domain, which is generally not how the domain/Darklord set-up is supposed to work. It feels like whoever wrote the Carnival section didn't quite get the memo. It's certainly not a deal-breaker, though. I'd certainly use the Carnival in my games, though I would likely avoid going too much into the backstory.

Speaking of backstory, fans of the Carnival's previous incarnation may be pleased that it retains a connection to the mysterious villain known as the Gentleman Caller. (Although now it's just known as The Caller.) Gone, however, is "the Twisting," Isolde's power to forcibly remake anyone into a circus freak. That bit is likely too attached to ableist tropes for 2021 Wizards of the Coast, although it would fit with the "body horror" tag that the Carnival supposedly exemplifies. Note, though, that Silessa's entry does still suggest that she was a snake who was transformed into an elf, so some remnants of the Twisting remain.

One thing I like about the Carnival write-up, and Van Richten's Guide to Ravenloft overall, is how willing the design team is to use reskinning liberally. Although Isolde is an eladrin, it's suggested that we use the cambion statblock for her. Similarly, one performer is a werehare, but since those aren't yet statted out (and likely don't need to be) using the stats of a wererat will get you close enough. I am less convinced that the werehare needs to be a "rapper," but that's just me. I guess hip-hop is now canonical to the D&Dverse, but as ever the WotC's sense of humor errs on the side of lame: a hippity-hop does the hip-hop, you see. 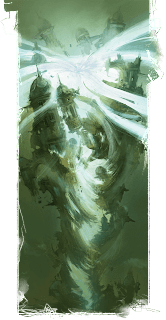 In its original conception, Darkon was the most "fantasy"-oriented domain in Ravenloft. It was a magical land ruled by Azalin Rex, an evil lich-king, which is a premise not really far afield from any vanilla high fantasy setting. As a remedy to the relative blandness of that idea, and as a way to advance the setting's metaplot, Darkon was revised in the 2e-era as a land that had undergone a necromantic catastrophe that resulted in arcane strangeness, the rise of a figure called Death, and a boatload of undead roaming the land.

The 5e version of Darkon riffs on the idea of a magical apocalypse to some extent. Darkon is a domain that is literally dying. Now that Azalin has escaped his imprisonment in the domain (apparently through splitting his soul horcrux-style, though this is never fully explained and there are several random tables to determine Azalin's ultimate fate), the domain is slowly disintegrating and being consumed by the mists.

The bits that remain are pretty interesting. You've got a bustling port city that is visited by "eerie vessels from mysterious lands" (I want to know more about those!) and the ruins of Azalin's castle now suspended in mid-air, constantly reforming in new ways, due to a magical mishap. Some old favorites remain as well. The Kargat, Darkon's fascistic and vampiric secret police, are still active, as are the Eternal Order. There's also a bit of revisionism present. The Mad Slasher, a serial murderer who formerly haunted the domain of Invidia, now appears to be a fixture in Darkon. 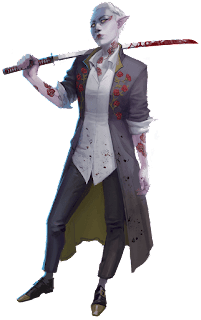 My favorite alteration here is that this version of the domain does away with the idea that anyone who stays within Darkon forgets their past life and assumes they have lived in the domain all their lives. That always struck me as a dopey element of the original. Perhaps a vestige of it survives in the description of the strange properties possessed by the spas of Nevuchar Springs, but it's slight enough that it doesn't annoy me.

The coolest thing about the Darkon section is that it posits three possible replacements for Azalin. If any one of these personages were be become the new Darklord, the domain would be saved from destruction. Of course, installing a Darklord also means empowering a villain and thrusting an irredeemable damnation upon them, so this is an extremely gray moral quandary to delve into for players--which makes it perfect fodder for a game. I can definitely imagine a campaign that forces the characters into the role of evil kingmakers in Darkon.