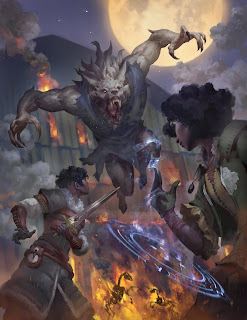 There have been many people covering the rules content in Van Richten's Guide, such as the new lineages, new subclasses, dark gifts, and other widgets, but I want to talk about the domains as a long-time fan of Ravenloft. How do they stack up, what alterations have been made, and how gameable does this iteration of the Domains of Dread feel? I've covered Barovia, Bluetspur, and Borca here, and the Carnival and Darkon here. Today we're talking about Dementlieu and Falkovnia, two domains that received massive facelifts yet couldn't be more different. 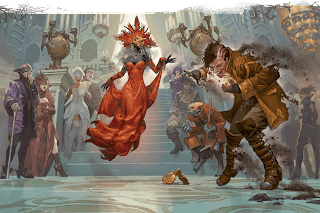 The original conception of Dementlieu is "Gothic France with a mesmerist villain." Unfortunately, it just wasn't ever very interesting and Borca already covered the "upper-class intrigues" angle. The version of Dementlieu in Van Richten's Guide to Ravenloft scraps almost all of that; I'd say it's one of the domains that has been altered the most from its origins.

The new Dementlieu is a "dark fairytale" realm. Where Dementlieu was once an entire nation, the new Dementlieu is now just a single city, Port-a-Lucine. Although characters in the domain sometimes talk of their estates in Chateaufaux, these tales are always a lie. And therein lies the crux of Dementlieu: it is the domain of impostor syndrome and "fake it til you make it," no one is what they seem, and everyone is constantly engaging in self-promotion and self-aggrandizement.

The central conceit of Dementlieu is that Saidra d'Honaire, the Darklord of the domain, throws a lavish masked ball every week. Everyone jockeys for status and position at the masquerade, but everyone is hiding something and fears being unmasked by the hostess. In this case, being unmasked carries a dire penalty: Saidra is a combination of a Poe-esque "Red Death" figure and a dark Cinderella who has the power to disintegrate anyone attending the masquerade.

When I first heard about the changes to Dementlieu, I thought this concept sounded fairly narrow and difficult to implement. But now that I've read the section on Dementlieu I have an abundance of ideas for adventures set here. I definitely have some glamor-hound, skulduggery-favoring players who will love this domain. 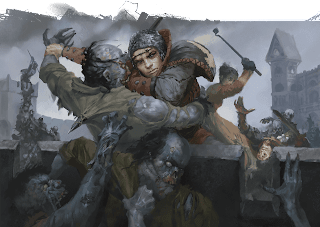 Like Dementlieu, the Falkovnia of Van Richten's Guide differs greatly from its original version. When Ravenloft first appeared as a setting, the designers essentially deployed two versions of Dracula. Strahd is obviously the Dracula of Bram Stoker's novel, but Vlad Drakov, Darklord of Falkovnia, was based on the historical Vlad the Impaler. As such, he was a tyrannical, bloodthirsty military leader destined to always have his bellicose ambitions come to nothing. His story is interesting, but it didn't really make for an exciting adventure location. (There was also a heavy emphasis on "fantasy racism" in the old Falkovnia that just plain made it difficult to navigate as a setting.)

The new Falkovnia is a land besieged; on the night of the full moon, legions of zombies emerge from the mists and attack the fortifications of the living. Adding a "zombie horde" domain was a really smart move for Ravenloft; it's got obvious appeal with the popularity of The Walking Dead. The new Darklord, Vladeska Drakov, is more than just a gender-swapped version of the old Darklord. Although she's a terrible, doomed person, there's some pathos in the fact that her tyrannical rule is the only thing standing between the people of the domain and being devoured by the undead.

This version of Falkovnia also incorporates an idea I used in my Ravenloft games: Falkovnia as a place where innovations in war machines is well underway. Overall, this feels like a Falkovnia you could actually use, especially if you want your characters to take part in defending the capital city from waves of zombies.