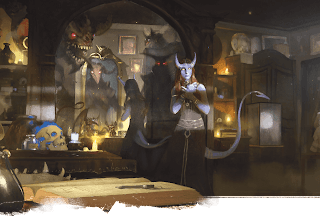 There have been many people covering the rules content in Van Richten's Guide, such as the new lineages, new subclasses, dark gifts, and other widgets, but I want to talk about the domains as a long-time fan of Ravenloft. How do they stack up, what alterations have been made, and how gameable does this iteration of the Domains of Dread feel? I've covered Barovia, Bluetspur, and Borca here, the Carnival and Darkon here, Dementlieu and Falkovnia here, and Har'Akir, Hazlan, and I'Cath here. In this installment, I'm discussing Kalakeri and Kartakass. 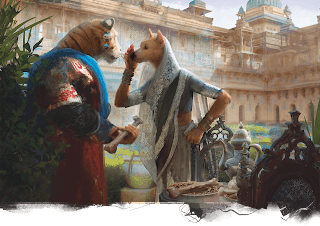 When it was first teased that Kalakeri was going to be one of the domains included in Van Richten's Guide to Ravenloft, I assumed that it was a new Indian-themed domain that was replacing Sri Raji, a similarly themed domain from the second edition version of the setting. It turns out that my assumption was only half true. Kalakeri is a remake of Sri Raji that preserves the name and monstrous nature of the land's former Darklord, the rakshasa Arijani, though it replaces his backstory entirely.

Kalakeri is now a land of civil war and betrayal. Control of the domain is contested by three siblings: the new Darklord of the domain is Maharani Ramya, a death knight risen from the grave after being betrayed by her siblings, who is cursed to fight endlessly against her Arijani and Reeva, her brother and sister who have been transformed into a rakshasa and an arcanaloth respectively. The overall effect reads as an Indian-esque, scaled-back "War of the Five Kings"-era Game of Thrones, with additional secret monstrosity thrown in the mix. As a war-torn land, Kalakeri feels well-suited for the horrors of battle or shadowy intrigues. It's actually a potent change for Kalakeri because it's previous felt a bit underwhelming as a location of high drama and adventure.

This particular remake has had some care put into it. Gone are any references to actual Hindu deities. There's also a nice set of rules for using the renown system from the DMG to track the characters' standing with either Ramya's loyalists or the rebels who have rallied around Arijani and Reeva. I do think that the "horror" content feels a little light in this domain, however. A clever DM could amp it up easily, but I would have liked to have seen more guidance about how to emphasize the horrific aspect of this domain.

One thing that seems odd, however, is Maharani Ramya's status as a Darklord. Becoming a Darklord is supposedly a punishment for horrific, unconscionable sins, but it isn't clear from the backstory exactly what terrible deeds Ramya is guilty of. She didn't usurp the nation's throne; she was hand picked by her father to receive it. She didn't work against her siblings; they grew jealous of her power and murdered her. As far as I can tell, Ramya was about as moral as several NPCs from other settings who are explicitly labeled as the good guys. It's strange that she is Kalakeri's figure of tormented evil. 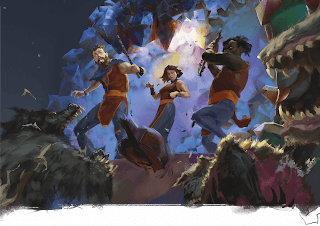 Kartakass is a strangely beloved domain from the 2e-era of Ravenloft. The premise of Kartakass has always been "land of bards," so it's popularity has always perplexed me a bit given how many people loudly proclaim their hatred of bards. The version of Kartakass presented in Van Richten's Guide will do nothing to salve the bard-hate, as it is now a land of try hards:

To outsiders, life feels staged and surreal in Kartakass, as every plant and beast, every peasant and performer strives to prove their greatness. Trees and flowers burst into bloom and then wither after their extended spring, while songbirds sing themselves hoarse. And every local, from the youngest child to the most venerable elder, knows that dreams, fame, and immortal adulation are theirs for the taking—if they prove worthy.

Essentially, entering Kartakass will feel like walking through the doors of a Denny's a 2am when the drama club kids hold sway, high off a fresh performance of Little Shop of Horrors. Truly a horrifying prospect.

Familiar touchstones remain. Each settlement in Kartakass is independent and ruled by a meistersinger. Meeklebrau gets a shout out. And yet, the strange and fantastical elements get bolstered this time out as well. There's a village comprised entirely of actors who stay in character around the clock and there is a musical venue inside a massive geode. One of the towns has an evil record label feel, as the aging powermongers in it are always on the lookout for ways to exploit the talents of young and gullible performers. 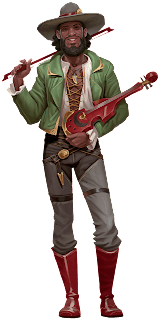 I'd be remiss if I didn't mention the changes to Harkon Lukas, the domain's Darklord. Apparently many people are upset that the illustration of Harkon Lukas does not feature his trademark monocle. I admit that I've never paid much attention to Lukas, but even though I read an entire novel about the guy it never sunk in that wearing a monocle was a central facet of his character. Additionally, Lukas is no longer defined as a "wolfwere." Now he's a loup garou, which are basically super-charged werewolves. I love this change because the concept of the "wolfwere" is some truly goofy D&D nonsense that's right up there with space hamsters. Lastly, Van Richten's Guide presents Harkon Lukas as a black man, which some people are also upset about. To which I can only say, "Hold that L and die mad about it."
Posted by Jack Guignol at 11:12 PM