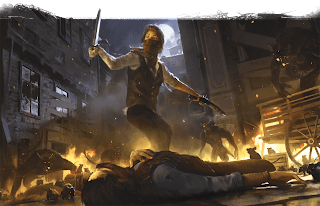 There have been many people covering the rules content in Van Richten's Guide, such as the new lineages, new subclasses, dark gifts, and other widgets, but I want to talk about the domains as a long-time fan of Ravenloft. How do they stack up, what alterations have been made, and how gameable does this iteration of the Domains of Dread feel? I've covered Barovia, Bluetspur, and Borca here, the Carnival and Darkon here, Dementlieu and Falkovnia here, and Har'Akir, Hazlan, and I'Cath here, and Kalakeri and Kartakass here. This time I'm covering Lamordia, Mordent, and Richemulot. 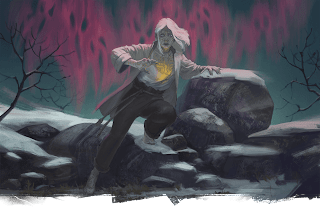 In the 2e era, Lamordia was extremely focused on the story of its Darklord, Victor Mordenheim--Ravenloft's Victor Frankenstein analog. Beyond Mordenheim and his flesh golem creation Adam, there just wasn't much to the domain. The most interesting thing about the people of Lamordia, for example, is that they are atheists. Van Richten's Guide gives Lamordia a much-needed makeover that manages to put its Darklord front and center while also giving the domain more general utility overall.

The new version of Lamordia has been reimagined as an all purpose domain of mad science. Lamordia retains its frozen wilds, but now features industrialized cities where constructs work for the populace and areas of arcane radiation. I was surprised to see that the text explicitly defines the domain as a "steampunk" riff. Amazingly, Lamordia now features Ludendorf University, a place of scientific breakthroughs and unwholesome experiments; my personal vision of the setting has long included Ludendorf University in exactly that capacity! I also like the addition of ironclad whaling vessels that hunt...something...in the frigid waters offshore of Lamordia. Shades of Dishonored, there.

The Darklord of Lamordia is one of the handful who have been gender-swapped in this version of Ravenloft. Victor is now Viktra Mordenheim, a brilliant by utterly amoral scientist, and frankly she's much more interesting than her antecedent. Her creation is Elise, her former body snatching lover who was reanimated after an untimely demise. However, Elise now continually flees from Viktra--keeping both herself and Viktra's greatest scientific triumph just out of reach. Mordenheim's section includes many hooks that involve the characters falling into her clutches and being remade as her servants. Many of these ideas are quite unorthodox for D&D, and they do a great job emphasizing the body horror aspect of the domain. Overall, this new Lamordia is a triumph--I love this domain much more now than I ever did in the past.

Mordent has a long history in Ravenloft, dating back to 1e's House on Gryphon Hill adventure, and it has always been the setting's premier domain for ghost stories in the British tradition. Mordent retains the feel of being a haunted countryside, but this version manages to be both bucolic and more populated. It's also got a dark heart: everyone who dies in the domain is destined to return as an unquiet shade. As such, Mordent is a realm in which the present can never truly escape the traumas of the past.

Mordent has all the hallmarks of the British ghost story: haunted estates, prevalent spiritualism, and a fixation on "proper behavior" that masks base prejudice. Lord Wilfred Godefroy makes for a good spectral Darklord, there are details about important NPCs who call Mordent home such as Van Richten and the Weathermay-Foxgrove twins, and we get a little bit about the famed Apparatus that was central to The House on Gryphon Hill. I like everything here, and to be honest I wouldn't have minded even more detail.

Richemulot previously stood as the rural version of Gothic France in contrast to Dementlieu's urban iteration of the French Gothic. Now that Dementlieu has been reimagined as a dark fairytale realm, Richemulot is free to be something other than Dementlieu's bumpkin cousin. Nevertheless, much of the old Richemulot remains; the domain is generally more urban, but it emphasizes urban decay: the cities are rife with abandoned buildings, plagues decimate the population, and swarms of marauding rats flood the streets. Jacqueline Renier remains largely unchanged as the domain's wererat Darklord.

To be honest, coming off the Covid lockdowns makes the disease-and-quarantine theme of Richemulot hit a little close to home. Richemulot's section features rules for the plague's cycle, for those that wish to delve into that aspect of the setting. All in all, I really like the feel of Richemulot as it is presented here. It reminds me a bit of the "Night of the Hunt" from Bloodborne, in which monsters and disease take over the streets by night.