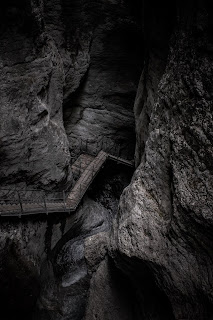 I've been running the adventures in Candlekeep Mysteries lightly reskinned for my Krevborna setting. The characters are all employed as members of Creedhall University Library's "Special Collections" department, aka adventurers. This is a recap of what happened in the second half of "A Deep and Creeping Darkness." Fair warning: spoilers lurk below.

We last left our heroes in the midst of searching for a safe place to bunk down in the abandoned mining town of Vermillion. They had just explored the blacksmith's shop and had now turned their attention to the stonemason's residence. Unfortunately, the stonemason's shop looked like it had been ransacked. The front door had been torn off its hinges and lay forgotten in the grass.

Inside, it appeared as though someone had also thought to use this building as a shelter; they found a bedroll and pack. However, the bedroll was spattered with bloodstains that were neither old nor entirely fresh. Checking the nearby pack revealed that whoever it belonged to had stolen a number of diaries from the burgomaster's residence. The first few volumes documented the town's day-to-day operations, but the volume that would have held the juicy details of the doom that had befallen Vermillion appeared to be missing.

Since the stonemason's door was compromised, the group decided to spend the might in the smithy instead. During his watch, Tobias heard a strange scratching at the window. Then, the door to the smith's cottage began to shake. A closet door flew open, shadowy tendrils emerged and wrapped around Elsabeth--who was then pulled into the closet, which shut with a slam. (Later, when the closet was re-opened, there was no sign of Elsabeth inside.)

Rising Leaf had had enough; he kicked the door open and saw that their shelter was under assault by three small insect-like humanoids with crab-like claws, clacking mandibles, and bodies covered with coarse quills. A brief skirmish decided the victor: the party emerged a bit worse for wear, but their foes lay dead before them.

In the morning, the group headed toward the opening of the mine. Inside, they found that the darkness strangely seemed to repel the light of their lanterns and torches. Rufus and Rising Leaf both heard a cacophony of voices drifting forth from the tunnels, but Tobias heard nothing unusual. As they explored, the group found a mossy trap and strange pools of black water. Farther into the mine, the tunnels that had been dug into the mountain became oddly smooth and showed no signs of having been created with conventional mining implements. The walls of these tunnels were covered with a strange black fungus.

After following a number of branching tunnels, the group found themselves in a larger, perfectly round chamber supported by four fungus-encrusted pillars. Also within this chamber were a number of stone slabs, one seemingly occupied, and another group of the creatures who had attacked the blacksmith's shop. The combination of Rising Leaf's martial arts, Tobias's mentalist magic, and Rufus's werewolf-like transformation into a powerful beast again carried the day.

When the dust had settled, the occupant of the slab turned out to be the man who had tried to seek shelter in the stonemason's shop. Unfortunately, he was half-transformed into one of the creatures haunting the town! The man was anguished and panicked over the alterations made to his body, but the group managed to talk him down with promises of finding him help once they arrived back in Creedhall. A pile of aborted transformations was later uncovered--clearly the process didn't always result in a success. Also discovered in a heap of rubbish was the missing diary. The group loaded the man and their treasure trove of books onto their wagon, and headed back to the University Library with their spoils.