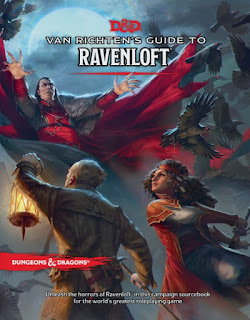 Now that I've made posts covering all of the domains in Van Richten's Guide to Ravenloft, I want to do a brief overview and review of the rest of the book's content. Let's start with Chapter 1: Character Creation, which features the book's player-facing goodies.

The first chapter begins with advice for players about how to engage in a horror-themed adventure or campaign. This is a particularly worthwhile discussion, as one of the elements of playing in a horror game that is rarely addressed is the importance of player buy-in. It's not uncommon to see players complain online about how horror games aren't "scary," when the issue is that they're the ones who aren't leaning in to the genre. The advice in this section includes the admonition to "limit comedy," which is a deceptively important piece of advice. Of course you aren't going to achieve a horrorific atmosphere if you're cracking the same tired Monte Python jokes. 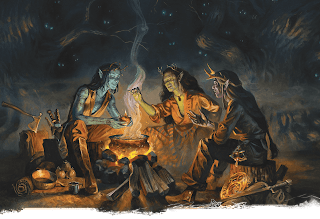 This section also includes three lineages for player characters. Lineages differ from "races" in that they can either be chosen at character creation or added to an existing character in play to mark their transformation into some more horrifying. The three lineages are dhampir, reborn, and hexblood. The dhampir and reborn cover classic horror archetypes; they're vampiric beings (without being fully undead) and creatures brought back from the grave ala Frankenstein's monster. The hexblood has less of an origin traceable to classic horror tropes: they're people who have made bargains with hags and found themselves transformed as part of the pact.

This section also includes rules for Dark Gifts, abilities that grant useful powers and act as limited curses that could bedevil the characters. Dark Gifts are usually "boons" granted by entering into a compact with an evil supernatural entity, but they can also be used to represent the ways that characters in Ravenloft are warped by the setting itself. In that sense, they take the place of the Dark Powers Checks of previous editions, though they are different in one important respect: a player has the agency to agree to a Dark Gift being bestowed upon their character, rather than being foisted on a character as punishment for "playing wrong." There are eight Dark Gifts detailed in the book, which of course leaves plenty of room to invent your own to fill in the inevitable gaps. 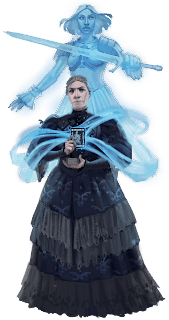 Van Richten's Guide to Ravenloft also details two new subclasses: the College of Spirits bard and the Undead patron warlock. Bards of the College of Spirits use ghost stories to fuel their powers; they're very much in the mold of Victorian spiritualists. The Undead patron is essentially a replacement for the Undying warlock patron, which was widely deemed to be underpowered. A warlock who selects this patron serves a powerful undead creature; several big name undead in the D&D multiverse are name-checked as potential patrons. Oddly, Azalin Rex is mentioned even though he's "missing" in the setting as presented in the book. I've never been particularly concerned with mechanical balance, so I won't evaluate these subclasses in that regard, but they both have a number of interesting and compelling features that fit their themes.

Closing out this section are a number of new background features, such as the ability to navigate the Mists or communicate with ghosts as a spirit medium, a reprinted (and corrected) haunted one background, the investigator background, random tables of characteristics suited for characters in a horror game, and a table of horror-centric trinkets that a character might begin play with.