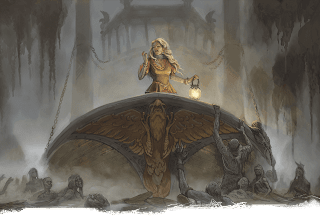 Now that I've made posts covering all of the domains in Van Richten's Guide to Ravenloft, I want to do a brief overview and review of the rest of the book's content. Last time we looked at Chapter 1: Character Creation, so now we're moving on to Chapter 2: Creating Domains of Dread.

The Creating Domains of Dread chapter is comprised of three sections: Creating a Darklord, Creating a Domain, and a discussion of Genres of Horror. The Creating a Darklord and Creating a Domain sections offer a combination of general advice, leading questions, and random tables to aid the DM in generating their own bespoke content for the setting. Everything here is pretty straightforward and feels sound; Darklords are perversions of virtue, they're irredeemably evil, and their domains are cages designed to torment them forever.

One piece of advice struck me as being both really good and an about-face from the 3e version of Ravenloft: "Don’t get bogged down with the particulars of a working society." Many Ravenloft fans love the detail in the 3e books produced by S&S and feel that it made the setting feel more "real" as a "living, breathing world." Personally, I don't need or want two pages of detail on the ten most common trees found in Falkovnia, so the 3e-era books often feel hideously bloated to me. 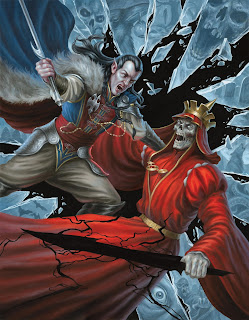 That said, the way that the 5e version of the setting relies on "nightmare logic" to explain away anything truly strange doesn't hit the spot for me either. The problem here is that basing everything on "nightmare logic," which really is the horror equivalent of "a wizard did it," robs the setting of the power of the uncanny. It cannot be adequately expressed how important an uncanny atmosphere is to horror stories. Unfortunately, when there is no baseline of reality to subvert, the power of the uncanny has little room to operate. I've said it before, but if everything is weird, nothing is.

Rounding out this chapter is a discussion of different genres of horror to use as inspirations for your new Darklords, new domains, or adventures set in Ravenloft. This section covers body horror, cosmic horror, dark fantasy, folk horror, ghost stories, and Gothic horror in detail. Each of these genres is given a brief overview, as well as random tables of monsters, villains, torments, settings, adventure sites, and plot hooks specific to their generic conventions. This section also gives terser overviews of four other horror subgenres: disaster horror, occult detective stories, psychological horror, and slasher horror. I like the advice here to mix and match the genres instead of keeping them separate or discreet; horror fiction rarely plays by a set of tightly defined rules. 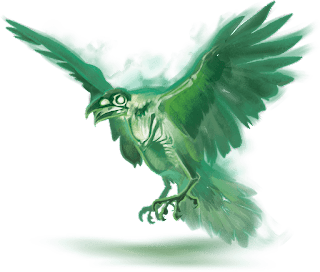 It is interesting that for this version of Ravenloft WotC has chosen to move away from the idea that Ravenloft is solely a "Gothic fantasy" setting. To be honest, before the book was released this was an facet of it that gave me pause. However, now that I've had time to read the book and digest its content, the move makes a great deal of sense to me.

Perhaps one of Ravenloft's limitations in the past was a steadfast adherence to the Gothic at the expense of other creative, but still horror-based, tangents. And realistically, Ravenloft's Gothic basis has always been cribbed more from horror movies that inherited the Gothic second-hand, rather than the original Gothic texts themselves. In the end, any feeling that the 5e version has strayed from the setting's mission statement are likely misplaced. After all, all of the horror genres the setting now takes inspiration from have clear and obvious roots in the Gothic in the first place.