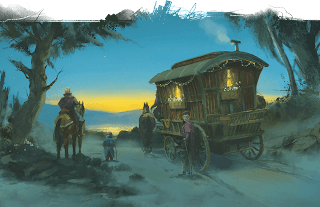 There have been many people covering the rules content in Van Richten's Guide, such as the new lineages, new subclasses, dark gifts, and other widgets, but I want to talk about the domains as a long-time fan of Ravenloft. How do they stack up, what alterations have been made, and how gameable does this iteration of the Domains of Dread feel? I've covered Barovia, Bluetspur, and Borca here, the Carnival and Darkon here, Dementlieu and Falkovnia here, Har'Akir, Hazlan, and I'Cath here, and Kalakeri and Kartakass here, and Lamordia, Mordent, and Richemulot here. We're finishing out tour of the major domains by looking at Tepest and Valachan.

The 2e version of Tepest always struck me as a good concept poorly executed. It's main issue is that it combines two ideas that are quite strong on their own, but don't really fit congruently together. On one hand, Tepest is a realm that draws on Celtic folk tales to posit to domain haunted by evil fey creatures. On the other, it's also a domain that emphasizes the abuse and intolerant ideology of organized religion, as is often demonstrated by Gothic novels such as The Monk. The church in the old Tepest creates an atmosphere of hate and fear directed toward all fey creatures, whether they are malign or not. However, some odd choices were made there; for example, the church in Tepest is based on the Celtic pantheon, which feels like a weird fit for a religion supposed to be oriented against the fey.

The new version of Tepest takes on aspect of the old version, a leaning toward folk horror in regards to the fey, and explodes that into the overarching theme of the domain. The Tepest presented in Van Richten's Guide is boiled down to a single settlement, the village of Viktal, and makes it the centerpiece of the premier folk horror domain in Ravenloft. As such, the influences are obvious: both The Wicker Man and Midsommar loom large here. Viktal is a simple rural community of friendly villagers...who prove to be a little too friendly. In truth, their survival is contingent on offering a sacrifice to a hag known as Mother at a seasonal celebration known as the Tithe. 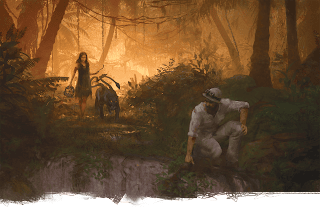 I've posted before about how I feel that the former Darklord of the 2e-era Valachan, Baron Urik von Kharkov, was a huge missed step. His backstory is hopelessly convoluted and pointless (he was originally a panther, who was transformed into a man, and later became a vampire), and it was always gross that the sole black Darklord of the Ravenloft's Core was a beast at heart. If there was a single domain that was badly in need of revision, it was Valachan.

Thankfully, the version of Valachan in Van Richten's Guide is absolutely amazing. A strong and compelling theme emerges: the fear of being hunted. The Darklord of the new Valachan is a woman named Chakuna, and like her literary antecedents in "The Most Dangerous Game" and The Sound of His Horn, she hunts those who have had the misfortune of finding themselves in her jungle domain. I love the ways that this new version of the domain has connections to both the domain's past and its use of D&D's trappings; Chakuna explicitly slew and overthrew Baron von Kharkov and she hunts her prey with a pack of displacer beasts!