Sibersk: The Realm of Feudal Vampires

As promised in a previous blog post, I'm hard at work revising the Krevborna book for a second edition. I poled the folks over on my Discord about which revised region they'd like a peek at first, and "Lamashtu" was tied for the top spot.

It's a good place to start, as this region has received some of the heaviest revisions. For one thing, it's no longer known as "Lamashtu"; it's been renamed Sibersk. For another thing, as you'll see Alcesta von Karlok is no longer the undisputed sovereign of the area. This change is fallout from events that took place in my home campaign, but the idea of Alcesta having a rival makes for a setting with more drama and more possibility for the characters in your game to get mixed up in intrigues and machinations.

Below is the overview of Sibersk. 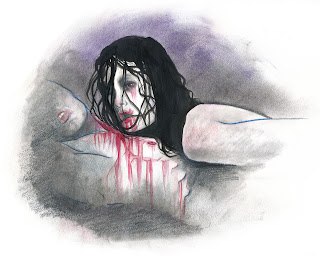 A Cold Realm Ruled by Houses of Feudal Vampires

Once part of Krevborna in the era of the tsars, Sibersk was annexed centuries ago by vampires who arrived with armies of undead marching under their banners. After the land was conquered and subjugated to the will of its new undead masters, Sibersk was divided into fiefdoms, each ruled by a noble house of vampires.

House von Karlok and the House of Draghul are the most powerful and prominent. They do not yet war against each other openly, but they do commit acts of espionage and venture the occasional assassination attempt against each other. It is inevitable that Countess Alcesta von Karlok and Count Magnus Draghul engage in an overt battle for control of all Sibersk. The conflict is destined to be bloody and ruthless.

Since the coming of the vampire lords, the winters have grown longer and colder in Sibersk. Once Krevborna’s breadbasket, the people of Sibersk must now fear famine in addition to the predatory whims of their vampire overlords.

• Sibersk is a cold northern realm of defiled cathedrals and sprawling castles.

• The mortal peasantry must pay a tithe in blood to the vampires who rule over them as feudal lords.

• A look of fear, resentment, and resignation is common in the eyes of the Siberskan serfs.

• Although they are oppressed by undead aristocrats they cannot hope to overcome, revolts among the serfs are becoming increasingly violent and dangerous.