To the Black Pyramid 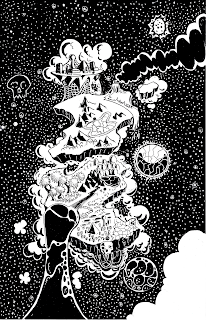 Aos's Spelljammer campaign continues! The first adventure is chronicled here and the second is here. Here's what went down in the latest installment:

To the Black Pyramid

Ted and Xastra recruited Professor Nefarious Jones to help repair their recently acquired scorpion ship, which has been christened The Al Waxman. While repairs were underway, the crew was approached by a mysterious one-legged figure in a space suit, his face obscured by a helmet. The man introduced himself as Mister Cook, but Xastra immediately dubbed him Captain Cook. Cook produced a map to an area that Xastra had a keen interest in: it showed the location of the black pyramid from her dream!

Cook claimed that he wanted to travel to black pyramid because it held the promise of a way to magical heal the burns that covered his body. (Which is why he kept his helmet on at all times, supposedly.) He also said that the pyramid contained heaps of treasure, so that was enough to convince the party to take him there on the Al Waxman's maiden voyage.

The trip to the black pyramid was uneventful, but as the Al Waxman flew into range of the structure its crew saw a disheartening sight: an illithid nautilus craft was parked nearby. Deciding that a little discretion was called for, the Al Waxman touched down amid a field of monoliths that hid it from view.

The party explored the pyramid, and it quickly became apparent that there were two factions already striving against each other within it. They encountered no mind flayers, but they did get into a few scrapes with gnoll janissaries wearing illithid livery. They also encountered several groups of neogi, one of which was large enough to convince them not to engage. Professor Nefarious did sabotage a door (which a little help from Xastra's invisibility spell) that maybe kept them contained to one part of the complex.

The group did manage to score some solid loot in their exploration, including a skull amulet that fires magic missiles and two scrolls.

Their most interesting encounter in the black pyramid was with a flesh golem who was occupied holding up the ceiling in one of the pyramid's chambers. The golem didn't seem to have any self-knowledge about his origins, but he sure was holding the roof up like a champ.

The adventure ended on a cliffhanger when the party opened a door and suddenly they were all sucked into...space? An anti-gravity field? Something. We'll find out next time.