Now that I'm running the adventures in Journeys Through the Radiant Citadel, I'm going to be writing reviews of them informed by my actual play experience, much as I did previously with Candlekeep Mysteries. Next up, "Wages of Vice." Warning for those who plan on playing these adventures: spoilers ahead! 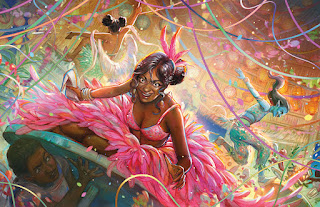 The premise of this adventure is fine--someone is killing off the children of the most prosperous citizens of a city, that's nice and dramatic--but unfortunately it's badly let down by the execution. The central problem is that the adventure is far too linear; the characters move from point A to point B to point C, largely having the same encounter (someone innocuous attacks the child of someone of importance) until they get a big backstory loredump.

"Wages of Vice" would greatly benefit from a more open structure, and a little site-based exploration would have been appreciated too. Why not have the adventure's quest-giver point the characters in a number of investigative directions and let them choose how they tackle the leads they've been given?

Speaking of the quest-giver, this adventure suffers from a problem common to the adventures in Journeys Through the Radiant Citadel: it presumes that it doesn't strain credulity to have characters show up as strangers to a troubled location and get immediately hired by a quest-giver to sort things out. It's expedient, but as a start to an adventure it beggars belief if the residents of an imperiled site assume that the characters, who are as likely as not a motley crew, are both competent and altruistic enough to risk their lives on behalf of someone's else's issue.

The "hired on first meeting by the quest-giver" isn't the only aspect of "Wages of Sin" that feels repetitive. This adventure is the third in a row that takes place during a local festival. On one hand, I get it: on the surface, a festival is a good in-game event to express the flavor of a ficitonal place. On the other, it starts to feel like lazy shorthand when so many adventures in the book feature one.

Another repetition: The villain in "Wages of Sin" uses a poisonous substance to turn innocent townsfolk into mindless murderers...which is also more or less an idea that appeared in the earlier "Written in Blood" too. "Wages of Sin" suffers from these similarities, as they just make you think of adventures that did something equivalent, but better.

As written, I think this is the weakest adventure in Journeys Through the Radiant Citadel so far. We had a decent time with it, but the adventure didn't do itself, or us, any favors.