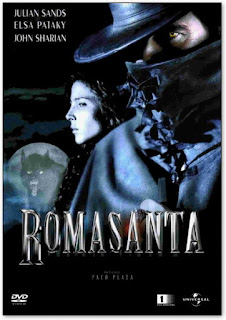 Romasanta was far better than I expected it to be. The acting was good, the women beautiful, and I really liked the weird anachronism of the setting (it’s set in 1851, but looks like it’s set in the early modern period...and then someone mentions genes, which is a solidly twentieth-century understanding of biology). 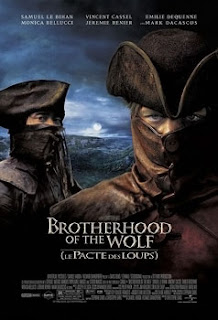 That said, the poster art is massively misleading. Anyone expecting a low-budget riff on the same territory covered by Brotherhood of the Wolf is bound to be disappointed; despite the garb showcased in the above image (which doesn’t even feature prominently in the film–if at all), Romasanta doesn’t have any of the swashbuckling kung-fu of that film.

Werewolf film buffs in general are liable to be disappointed as well. By the end of the film it’s not clear that there even is a werewolf at work here. Romasanta is based on the life of a nineteenth-century Spanish serial killer Manuel Blanco Romasanta, who claimed that he murdered because he was under a curse which caused him to turn into a bloodthirsty wolf. His trial is noteworthy because it featured phrenology (my favorite pseudo-science) and because Romasanta’s sentence was commuted by Queen Isabella II. Interestingly, the sentence was commuted at the request of a mysterious Dr. Phillips (possibly the exiled hypnotist Joseph-Pierre Durand de Gros) so the doctor could study this case of "psychological lycanthropy."

So, between the real-world case and the film, what’s gameable here?