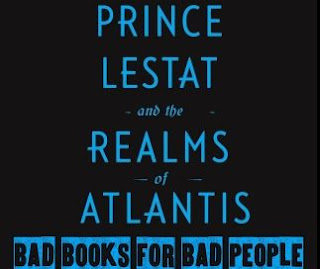 Have you ever wanted to hear me rant and rave about vampires-as-superheroes, crybaby ancient aliens, ghosts-with-bodies, pants, space-age polymers, and nipple-sucking clones? Well, you're in luck, the new episode of my podcast with Tenebrous Kate is up!


Beginning with her smash hit debut novel, 1976's Interview with the Vampire, Anne Rice has spent a career detailing the lives, loves, and melodramas of a sprawling cast of supernatural characters. In interviews where she's discussed 2016's Prince Lestat and the Realms of Atlantis, Rice promised a whole new spin on her beloved Vampire Chronicles. The concept of blending gothic vampires with new age science fiction is an appealing one, but does the author deliver on her promise? Jack and Kate dive into this latest offering from the queen of modern gothic horror.
How many of the Vampire Chronicles books have our hosts skipped? Will Kate's dreams of lots of characters she doesn't recognize meeting up with ancient aliens come true? Will we learn the vagaries of vampire science? Isn't a ghost with a body just a dude? How is Lestat doing after all these years? Find out all this and more in this month's episode of Bad Books for Bad People.
***Spoilers Abound***
Listen to the newest episode of Bad Books for Bad People here!
Intro/Outro music: "Pictures of Betrayal" by Nosferatu.
Find us at BadBooksBadPeople.com, on Twitter @badbooksbadppl, Instagram @badbooksbadpeople and on Facebook. You can discover where to get all the books featured on Bad Books for Bad People on our reading list.
Posted by Jack Guignol at 12:04 AM