I have a pet peeve when it comes to rpg design: I really don't like it when designers leave the XP or advancement system undercooked. If the rules for advancement or leveling up don't feel finished and if they don't offer incentives for the players to engage with what the game is about, I think you didn't finish the job of making a game. 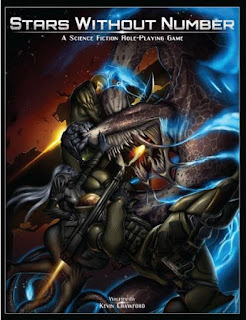 But here's where it all falls apart:
1) Getting XP for "certain goals" is already vague, but what a proper goal looks like and how much XP it should be worth is never spelled out, as far as I can tell.

3) Making off with "insufficiently guarded wealth" is intended to be the old-school D&D method of 1 GP = 1 XP since Stars Without Numbers is basically D&D-in-Space, but that's tucked away in a place that's not very intuitive--about seventy pages after the XP rules are given (131).

It's also really clunky in its implementation; characters shouldn't get XP for a big-ticket item like a space ships, and you should increase the amount of money they're getting per adventure because space ships are money pits, but that extra money you have to throw at them now shouldn't give XP because there wasn't much effort put into the mechanics of this idea: "You should not be reluctant to increase adventure rewards or oﬀer more remunerative opportunities to players with a starship to feed, though this should not increase the XP gained" (131).

It's worth noting that if more defined rules are buried somewhere in the book, the index will not help you find them; "Level," "XP," "Experience Points," "Advancement," etc. do not have entries in the index. 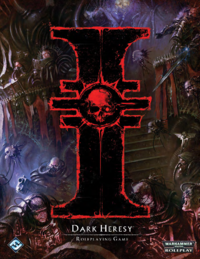 Dark Heresy has not one, but two systems for awarding XP. The first is to award a set amount of XP per session: "Under the abstract method, experience points are awarded for time spent gaming, ensuring a steady and even progression for all characters. For each game session composed of multiple encounters, every PC should receive 400 xp. This would allow them to purchase a minor increase in their capabilities approximately every session, or a more significant one every few sessions. This method assumes a game session lasts approximately four hours of active play time. For longer or shorter sessions, the GM can adjust the rewards accordingly" (371). What this system doesn't do is offer an incentive for doing anything during play, and only really rewards showing up to the game. As a system, it's easy and doesn't require much book-keeping, but it also strikes me as lazily designed because it doesn't connect to the premise of what the game is about.

Surely the more detailed system picks up the slack, right? Well, no, "It is also possible to award xp in a more detailed manner, in which every reward is tied to a specific difficulty or challenge. This allows the GM to match the PCs’ progression to the progression of events more closely, or to increase the players’ sense of accomplishment. However, it requires that the GM be able to evaluate each encounter and challenge and assign an appropriate amount of xp" (371).

This sounds like a system that was fully thought out, and there is even a chart showing you how much XP to award per character based on seven categories of encounter difficulty. Unfortunately, however, although this system does create an incentive ("win" encounters), it is ultimately incomplete because the rules offer no guidance as to what constitutes as "easy" encounter or a "very hard" encounter. The designer has absolved themselves from providing what seems like a fairly crucial part of how XP will be awarded.
Posted by Jack Guignol at 12:01 AM