The Ashford "Twins" and Patterson Creed 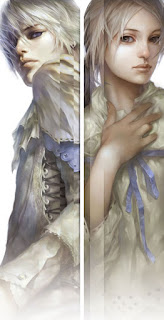 VIVICA AND VIVIAN ASHFORD
This pair are not twins, as such; one of them was abducted by an insane mage and cloned as a being of the opposite gender—they share the same memories, so neither is sure which is the original. They use their uncanny synchronicity to bewilder their foes.

Occupation. Leaders of the Carrion Worms gang.
Appearance. Human, androgynous, lean, blonde hair chaotically shaved and spiked, dressed in stylish light armor.
Abilities. Street fighting, smuggling.
Traits. Greedy, competitive.
Ideal. To uncover the secrets of their origins and create an army of Ashford simulacra.
Bond. Unbreakable bond with each other.
Flaw. They care more about each other than anyone else. 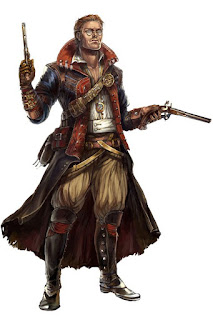 PATTERSON CREED
Patterson Creed is the third son of a wealthy merchant, and it was expected that he would join the Covenant rather than enter into the family business. Instead, he left home to find Esme Corvinus and restore her to the Empire's throne.

This is a preview of the "supporting cast" section of the Umberwell book, which has a meaty section on contacts that your criminal character might know. The Ashfords and Patterson Creed are examples of who you might know in Umberwell.
Posted by Jack Guignol at 12:08 AM