A City of Artifice 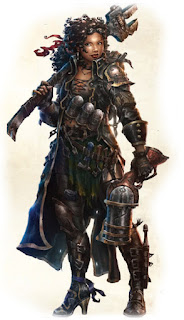 Magic is commonplace in Umberwell; it is used in conjunction with technology to achieve marvels such as ethergram communication, industrial factories, airships, automatons, worm trains, and mechanized replacement limbs.

PURPLE WORM TRAINS
You may wish to ride one of the city's purple worm trains—each a massive invertebrate annelid shaped by powerful transmutations and animated by necromantic magic—if you've a need to travel across the city, especially if you want to travel from one of the city-state’s islands to another via the city’s undersea tunnels. Umberwell's worm trains are owned and operated by Wyrmwyck Industries, a corporation of questionable motives that is tolerated because they keep their fares cheap enough for the common citizen to afford.

THE COMMON TONGUE
The Lexicos Spire, a tower in Shrewsbury erected by the magical rites of the Lost Matriarchs, is an enchanted edifice that transmits knowledge of the Common tongue to all within Umberwell so that the citizenry might communicate easily. Gyragrol, an ancient dragon, has designs on destroying the Lexicos Spire to break the fellowship of Umberwell's citizens.

BLOOD-FUELED INDUSTRY
The magic-imbued blood extracted from the great krakens of the sea enables Umberwell’s magical industry. The lamps which light the city's streets are fueled by galvanically rich kraken blood, many factories are powered by the fuel, and the hunting and processing of krakens on the high seas is itself a venture of massive economic importance. The Vortuga Trading Company is chief among Umberwell's blood-hunting fleets.