Gold For Fools and Princes Review

Now that I'm running the adventures in Journeys Through the Radiant Citadel, I'm going to be writing reviews of them informed by my actual play experience, much as I did previously with Candlekeep Mysteries. Next up, "Gold for Fools and Princes." Warning for those who plan on playing these adventures: spoilers ahead! 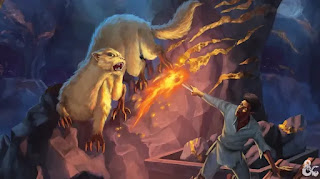 Gold for Fools and Princes

The premise for "Gold for Fools and Princes" feels a little tired: people are trapped in a mine and need to be rescued! To be fair, though, the premise is enlivened by the presence of two nobles who snipe at each other endlessly and are locked in mutual enmity, each of whom wants to be seen as the "savior" in this situation. Unfortunately, it's also one of the many adventures in Journeys Through the Radiant Citadel where an NPC immediately offers to hire the characters to help out as soon as they show up. No one checks resumes or calls references in DnDLand.

There are elements of this adventure I felt compelled to change in play. As written, the two noblemen don't feel as textured or even different as I'd like. To be honest, I struggled to differentiate them in my own head at first, which made presenting them as unique characters a bit of a struggle at the outset of the adventure.

Additionally, although this adventure does some site-based exploration in the mines, the actual map is extremely linear and doesn't take into account that players will try to excavate blocked tunnels--which is a no-brainer in a scenario that asks the characters to descend into a mine to find trapped miners!

I ended up altering the map on the fly as we played to account for player actions, but I shouldn't have had to do that--the adventure should have addressed that to start with because it's an obvious thing that players might try. In terms of adventure design, I believe that actions you can reasonably expect players to attempt should be taken into account in the overall design of an adventure. I suspect not including them as part of the scenario evidences a lack of DMing experience on the author's part, but that's just speculation. Space constraints in the adventure could also be a factor here.

Also, since the adventure focuses mostly on a single creature afflicting the mines. and even though it is an unusual creature, it doesn't lead to surprising encounters in the mines after the first combat.

While I'm griping, it isn't clear why the mine overseer doesn't help with the expedition into the mines or why the other miners aren't involved in the rescue effort. They're miners; they should be better at that than the characters.

Overall, I thought this adventure fine, though it does have a few issues that could have been avoided. To be absolutely fair to the scenario, I do have to note that the player who I ran it for absolutely loved it. While I wonder how much my alterations kept it afloat, his praise for the adventure was glowing--which really has to be taken into account. In the end, this adventure led to a quite successful and memorable adventure.