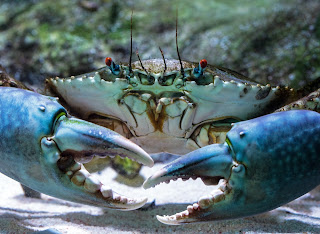 Aos had a joyous occasion to celebrate, so while his Spelljammer campaign was on hold I snuck in a little Planet Motherfucker--this time powered by Savage Worlds. Here's what went down:

A Night at the Circus

The characters were all currently in the run-town town of Old Bay in what used to be Maryland before the apocalypse. It was mid-autumn and the circus had come to town. Each of them knew the ringmaster, Professor Crotchington, and he had invited them to dinner at the circus. When they arrived, the fairgrounds were hopping; barkers were saying outlandish shit to get rubes to buy tickets to see the Wild Cro-Magnon of Cincinnati or get a peep at Tattooed Mimi, the Obscene Human Tableau. The rides, operated by shifty looking motherfuckers, were are all awhirl. Somewhere in the distance they could hear the sound of a badly played calliope. The crowd was pretty dense; there were a lot of sailors in their little sailor outfits about--every few seconds one of them drunkenly shouted "SHORE LEAVE!"

The group found themselves seated for dinner within the so-called Tent of Curiosities. Surrounding them were a number of glass cases holding the tent’s exhibits. Among the other dinner guests were Chuckles the Fuckface, the circus’s most popular clown, although his name may have been Fuckles the Chuckface, no one is sure; Bertha the Blockhead, who still had a nail protruding from her left nasal cavity; the famed contortionist Dirk Fleximan, of the New Hampshire Fleximans; and of course Professor Crotchington, resplendent as always in his striped trousers, waxed moustaches, and monocle.

As dinner was being served, dinner being a motley collection of fairground food like funnel cake, deep-fried hotdogs, jalapeno cheese fries, and cotton candy, Professor Crotchington rose from his chair to address his guests: “Ladies and Gentlemen, I have gathered you here today to tell you of a great discovery I’ve made in the field of…”

Just then the lights went out.

The circus’s generators must have all cut out, as they could hear people yelling in surprise outside the tent. Then, they heard the sound of breaking glass coming from inside the Tent of Curiosities. Herk quickly fashioned a pair of glasses that acted as a spotlight wherever he turned his head; from the illumination he provided, the group could see a bunch of thugs in striped shirts and black masks wielding wrenches, lead pipes, and baseball bats. The thugs were stealing exhibits from the curiosities tent. The group sprang into action, taking down the thugs--but leaving one alive for interrogation.

The remaining thug spilled the beans and told them that the theft was actually a ruse to make their break in look like a robbery, and that the real target was Professor Crotchington, who had been abducted by thugs who had fled. He also told them that their gang was led by Freddie the Finger--whose home address he gave up pretty quickly under the threat of a leg-breaking. Searching the pockets of the now-deceased thugs revealed that they each had a wad of opium and some broken poker chips that seemed to have a tiki logo on them.

Inside the Lair of Freddie the Finger

Somewhat incautiously, the group went over to Freddie's apartment and kicked the door in. What they found was that Freddie the Finger lived in a squalid room, complete with a stained mattress on the floor, lots of empty cup o soups, and gross dirty socks strewn around. Piled by the mattress was a stack of magazines that turned out to be Big Unnaturals, the rag for the gentlemen who prefers bosomy mutant women. Also scattered around were a lot of wallets and wristwatches--the fruits of many muggings.

Bad Times at the Pleasure Hut

The group found the entrance to the Hut down a dark alley. Loitering in the alley were some shady-looking characters, including some sailors who occasionally muttered “shore leave” under their breath. The door to the Pleasure Hut was barred, with a slit in the door to examine would-be entrants. A woman answered their knock at the door, but Milhouse promptly poked her in the eyes, causing her to back away from the door while it was shot open by Riley.

The inside of the Pleasure Hit was dank and dingy, with a carpet covered in truly disgusting stains. The place smelled of cigarettes and cheap incense. Everything inside was tiki themed: bamboo on the walls, waitresses in fake silk “Chinese” dresses scurrying to and fro with tiki mugs, etc. Most terrifying of all: an all you can eat crab leg buffet. Also, many gambling tables!

Every eye was on the party after their forced entry into the tiki speakeasy. Presiding over the operation was a pudgy guy in a Hawaiian shirt and straw fedora (though if you called it a fedora he would tell you it was a trilby); he questioned what they were up to, but when they told him they had been misinformed and told that shooting open the door was the special "knock" required for entry, he bought it and let them go about their business.

Milhouse joined the poker table while Silence chatted up a man at the bar. Their recognizance paid off: they both realized that people kept slipping down a dark hallway of the Pleasure Hut. Reconvening with Herk and Riley, they slipped into the hallway themselves and found it lined with framed pictures of the latter-day Beach Boys. Touching a photo of the Beach Boys eating sushi off of John Stamos opened a secret door leading down into the depths of the Pleasure Hut.

On the stairs down, the team could smell the sickly sweet aroma of opium being smoked. At the bottom of the stairs, they found themselves in a full-blown opium den with people lying on big, fluffy cushions while blissed out of their minds as they chased the dragon. A woman who looked like an aging Wendy-from-the-fast-food-place asked what their pleasure was. Milhouse pretended that he was the son of Freddie the Finger and said he was looking for his dad. Not-Wendy ushered the group behind a brocade curtain, and there was Freddie, a few thugs, and a tied up Professor Crotchington. Freddie took one look at the group and exclaimed, “It’s them! The mooks from the circus! We gotta scram!”

A couple of thugs grabbed the Professor and ran off with him down another hallway while Freddie and his gang engaged the group in fisticuffs. Additionally, a number of ninja from the Leg Clan (they dress like ninja on top, but wear fishnets and high heels down below) emerged from the shadows and attacked as well!

This is where things got weird. Milhouse produced a boombox that began to play "The Time Warp" from The Rocky Horror Picture Show, which triggered the ninjas of the Leg Clan to start dancing. Riley joined in, using his movements to commandeer the ninjas and steer them out of the fight. Freddie the Finger and the thugs were soon dealt with, and the group was in hot pursuit of the other thugs and the kidnapped Professor Crotchington. Before the thugs could spirit the ringmaster away into an unmarked van, they were taken out and Professor Crotchington was freed.