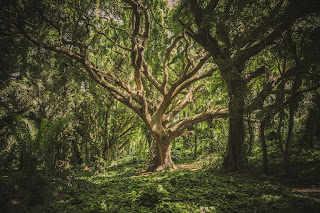 I've been running the adventures in Candlekeep Mysteries lightly reskinned for my Krevborna setting. The characters are all employed as members of Creedhall University Library's "Special Collections Department," aka adventurers. This is a recap of what happened in "Lore of Lurue." Fair warning: spoilers lurk below.

The Special Collections Department sent Elsabeth and Rufus to Catafalque Manor on the the outskirts of Creedhall. The lord of the manor, Laymon Price, had promised the library a magical book in return for help locating his missing daughter. As the duo arrived, they noticed that a strangely unruly and wild forest was encroaching on the otherwise manicured lawn of the estate. The pair were met at the door by a ridiculously handsome butler named Godfried and ushered into a parlor where they were served tea and tiny sandwiches shorn of their crusts.

Laymon entered and explained the facts of Esper's disappearance. The forest they had observed approaching the house was indeed unnatural; it had sprung up suddenly. One of Esper's slippers and an enchanted book were found on the path leading into its wooded depths, so it was presumed she had wandered inside the woods and become lost. The book was roughly the dimensions of a children's storybook; when it was opened, it looked blank at first but then an unseen hand began to write out the beginnings of a fairy tale involving the forest. However, when asked about Esper's age, Laymon couldn't rightly remember. He had to ask the butler how old his daughter was! Elsabeth and Rufus were unimpressed with his concern over his daughter's life.

Taking their leave of Laymon, the duo were escorted to the forest path where the slipper and book were found by Godfried. Along the day, Godfried was questioned and several interesting piece of information came to light. Laymon Price's wife had been dead for many years; the official cause of her death was said to be a heart defect, but locals whispered that Laymon had her poisoned when he discovered that she had been having an affair. The handsome butler had been in Laymon's employ for eighteen years, and since Esper was currently seventeen years old that raised some suspicions in Rufus and Elsabeth, particularly as Godfried seemed far more concerned with Esper's welfare than her "father."

As Elsabeth and Rufus readied themselves to enter the mysterious woods, they flipped to the next page in the book, which caused a map to be drawn in watercolors. Six locations inside the forest were marked out in magical animation: a meadow featuring a tankard that overflowed with ale, a plateau with a large tree with a face that vacillated between jovial and wrathful expressions, a mushroom forest with twinkling lanterns, a cottage made of gingerbread with smoke billowing from the chimney, and a campsite with a flickering fire. Part of the map, however, was missing--the page was torn. The pair decided to head for the meadow first.

While in the meadow, they heard the sound of drunken laughter as a trio of clearly intoxicated satyrs emerged from the woods. Unfortunately, the satyrs and the librarians had no languages in common, but they bridged the communication gap by sharing swigs from the satyrs' wineskin. The satyrs were headed toward the plateau, so Rufus and Elsabeth decided to travel with them. At the plateau, they encountered Feynor, a massive treant. Feynor attempted to commune with the creatures of the forest to ascertain Esper's whereabouts to no avail. Feynor suggested that Wheeldoli, the "mayor" of a fairy settlement in the mushroom forest called Dewlight, might be able to help them locate the girl. Before they departed, Feynor also gave them a potion of giant strength.

On the way to the mushroom village, the duo encountered four injured wolves who snarled and snapped at them. Rufus transformed himself into his lupine form and tried to convey that they meant the wolves no harm. Recognizing him as one of their own, the wolves became docile and nonthreatening. Elsabeth channeled the power of her oath to heal the wolves. Grateful for aid, the wolves followed the pair to Dewlight.

Dewlight proved to be a series of homes built into giant mushrooms that had tiny lanterns strung about them. Rufus and Elsabeth were greeted by Wheeldoli, a sprite in dapper clothes who dragged a human sized pipe filled with dank "pipeweed" behind him. During their conversation with Wheeldoli, red lightning crashed overhead; Wheeldoli said this was a sign that a "battle was brewing." Wheeldoli had not seen Esper, but the fey of his village had seen a number of unknown hunters in the woods. These hunters seemed to be indiscriminately killing whatever animals they could find for unknown purposes. When asked about the missing portion of their map, Wheeldoli informed them at a sacred pool could be found in that area of the forest. The group decided that the pool was their destination.

The path to the pool took them by the gingerbread house they had seen on the map. The house had a well out front and a barn behind it. Sensing an opportunity to gather a little more information from someone who might have encountered Esper, the pair knocked on the door of the cottage, which opened just a crack, revealing a blue-skinned hag. The hag asked for a description of Esper, said "She sounds delicious!" then slammed the door in their faces. Rufus knocked the door in and the duo were confronted by a horrific sight: the hag's gingerbread hovel was covered with mold on the inside and two fey woman lay bound and gagged on the floor.

After a short battle with the hag, her prisoners were freed. They had been lured into the hag's cottage with the promise of candy. They were also concerned about the fate of their friend who had been with them. The librarians suggested having a look in the barn, which proved to be filled with cages holding an array of wild animals. In the last cage, the third fey woman was discovered, but she was badly injured and unconscious. Elsabeth again altruistically used her divine magic to heal a wounded stranger. The fey women imparted some useful information: the hunters in the woods were wolfish beastmen and they had traded animals to the hag in return for some kind of alchemical unguent.

Before leaving, the group also dealt with a monster living in the hag's well. Rufus cut the rope dropping down into the well as the creature tried to climb up it. Elsabeth then called down a moonbeam into the well that decimated the creature.

Resuming their journey to the sacred pool, they encountered three of the wolf-headed hunters. They shadowed the hunters to see what they were up to. They watched in horror as the hunters felled a deer with their spears, then began to immediately feast on its remains. Figuring that there would be three less hunters to deal with later, the pair attacked. The battle was hard fought: Elsabeth and Rufus both took several injuries, Elsabeth used most of her magical resources, but they ultimately prevailed. They then chose to push on instead of resting, feeling that time may be of the essence.

When they reached the sacred pool, Elsabeth and Rufus discovered that it is not what had been promised. Everyone they encountered stressed the beauty of the pool, but instead of crystalline waters it was streaked with foul reds and blacks. Worse yet was what was happening at the pool's edge. Three of the wolfish hunters had made a pile of dead animals, on top of which was a young, unconscious girl who was missing a slipper. Rufus and Elsabeth immediately noticed a familial resemblance between the girl and Godfried, confirming their suspicions: the butler was her real father! In any case, she was clearly in need of rescue.

Since Elsabeth had taken considerable damage in the previous melee, she decided to hang back with Rufus's crossbow to harry their foes. Rufus asked the wolves that had been following them for aid, and they seemed to understand him. He also drank the potion given to them by Feynor. Elsabeth unleashed a crossbow bolt and Rufus threw a few javelins before moving into melee range with the hunters. The wolves also entered the fray, and proved surprisingly effective. Rufus was dealing massive damage due to his heightened strength, Elsabeth was peppering their foes from afar, and the wolves were finishing off the badly wounded hunters.

Unfortunately, the hunters weren't the only thing they had to worry about. Esper's body shuddered atop the pile of animal corpses, split open, and a gore-covered black unicorn emerged from the girl's body. The unicorn was a formidable foe: it was immune to the poison of Rufus's sword and dealt necrotic damage that he had no resistance to! However, that didn't stop Rufus from performing a heroic deed: he grabbed the unicorn, threw it prone on the ground, and then lopped its head off.

As the unicorn died, Esper gave a gasp and sat up. She no longer seemed to be torn asunder or bloodied in any way. She was, of course, disturbed to find that she was sitting atop a mound of dead animals, but the duo quieted her and led her out of the forest and back to Catafalque Manor. The mystery of the book was quickly unveiled: Godfried had sent the book to Laymon Price as revenge for killing his lover, Price's wife; as Godfried said, "You ruined my fairytale romance, so I hoped to entrap you in a fairytale that would be your ruin!" However, Esper had intercepted the book and been the one to be drawn into the magical forest.

Godfried drew a dagger and advanced on Laymon, looking to enact his frustrated revenge personally. Elsabeth and Rufus chose to...simply look the other way as Godfried stabbed the lord of the manor to death. They judged that Laymon had it coming. Leaving with the promised book in tow, Rufus and Elsabeth left Godfried and Esper to sort out their new father-daughter relationship, the death of Laymon Price, and the rest of their tangled family drama.